Skip to the beginning of the images gallery
MEHMED EMIN ÂLI PAÇA. 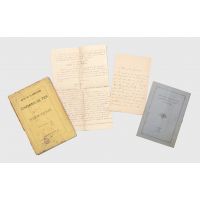 Fascinating group of documents relating to Baron Maurice de Hirsch's concessions to build and operate the Ottoman Empire's railway lines from Constantinople to Vienna, dating to the time the agreements were revised (1872) to when he was seeking to extricate himself (1887):

3. Further amendments from the Ottoman Minister of Works for Hirsch (c1887-88)

4. Agreement to advance funds to the Sublime Porte (to finance a military response to Bulgarian annexation of Eastern Rumelia) (1885-86)

The Ottomans built their rail network to boost trade, maintain imperial control, and facilitate Hajj. This was assisted by foreign private finance and expertise. First ventures in the 1860s included the Chernovoda to Constanza line connecting the Danube to the Black Sea, and the Rustchuk to Varna line taking cargo to the Danube and Black Sea. The latter, built by a British group, was owned by the Rustchuk-Varna Railway Company under a 99 year concession, which leased it in 1873 to Austrian banker, Baron Maurice de Hirsch (1831-1896). In 1869 the Porte granted its most important concession to Hirsch, to build 2, 500 km of main and branch lines connecting Constantinople to Vienna, and in 1870 Hirsch founded the Societe Imperiale des Chemins de Fer de la Turquie d'Europe to build the lines, and Compagnie pour l'exploitation des Chemins de Fer de la Turquie d'Europe to operate them. The venture was financed by the Turkenlose (3 Turkish Lottery Bond designed by Hirsch himself), and German and Austrian bank loans. Over the 99 year concession, Societe Imperial would receive 14,000 francs rent per completed kilometre from the Porte and 8,000 from the Compagnie.

Grand Vizir Mehmed Emin Ali Paca (1815-71), a moderniser who wanted closer ties with western Europe, had signed the agreement for the Porte. But he died in 1871, and his successor, Mahmoud Nedim Paça (1818-83), whose appointment was influenced by General Nikolai Ignatieff (Russia's ambassador at Constantinople), preferred linking with Russia via Romania. Mahmoud Paca's efforts to cancel the concession were, however, unsuccessful, due partly to Hirsch's appointment of Ralph Earle, former British MP and secretary to Lord Beaconsfield, who renegotiated the agreements, signed off on 18 May 1872 (item 2). By 1872, four disconnected lines ("stumps") had been built, and the Turkenlose had not raised sufficient funds. Under the new agreements the Porte took back the building concession (including the most difficult and costly parts), in the process reducing the distance to 1,250km, with the Societe Imperial as its contractor, and cutting the Compagnie's concession from 99 to 50 years.

The stumps were completed in 1874 (1, 180 km) but to the frustration of investors access was given to British goods via Aegean seaports and Constantinople but not German or Austrian goods from Vienna. There were also concerns about quality. The Ottomans complained in 1872 that Hirsch was using cheap materials (e.g. building bridges from wood rather than stone). An inspection in 1874 found that not all work claimed to have been done had been done, noting towns without railway stations and railway stations without towns, with trains running behind schedule.

Unrest in Bosnia and Bulgaria (1875-78) and the Russo-Turkish War (1877-78) halted construction. The Ottomans lost much territory through which the Rumelia lines ran. Already heavily in debt after the Crimean War, Turkey was pushed to the brink of bankruptcy by the Congress of Berlin (1878), which also entrusted the newly formed Principality of Bulgaria to provide the rail link to the Austrian frontier, awarding Hirsch's Compagnie 7,000 francs per km per year in rent.

Turkey, Bulgaria and newly independent Serbia were keen to complete their lines (the latter forming their own rail companies in 1882 and 1885), though Bosnia's line was abandoned. Bulgaria's annexation of Eastern Rumelia including the nearly completed Belovo to Vakarel line in September 1885 further delayed progress. As this was contrary to the Congress of Berlin, the Porte wanted to respond militarily but did not have the finances to do so. It therefore obtained from Hirsch a one off "advance" of 23 million francs, one of the conditions of which was a reduction in the fee from 8,000 to 1,500 francs per km (item 4). However, the Ottomans proved powerless to act, and on 5 April 1886, Mahmoud Paca signed the Tophane Agreement recognising Bulgaria's reunification. A new agreement had to be worked out for the Belovo-Vakarel line, which Bulgaria completed in 1888 with the first train leaving Vienna for Constantinople in August. This provided the route for the Simplon Orient Express, connecting Constantinople to Paris and London in June 1889.

The many complexities involved prompted Hirsch to withdraw. Talks with the Imperial Ottoman Bank in 1882 and 1887 and Austrian State Railways in 1883-84 failed over concerns about unresolved issues with the Porte. In 1888 a group of banks realised relations between Hirsch and the Porte needed to improve, and Oscar Strauss, US Ambassador in Constantinople, stepped in to mediate. Agreement was reached on 25 February 1889, under which Hirsch repaid 60 million francs to the Ottomans. This cleared the way for a consortium led by Deutsche Bank and Wiener Bankverein to buy his share in April 1890. Hirsch made 170-180 million francs from the venture. The documents offered here coincide with his efforts to make his company attractive enough to sell off (items 1-3).

Ottoman attention then turned to Asia. For Deutsche Bank, buying out Hirsch was a strategic move: it had become involved with the Anatolian Railway Company in 1888, and was seeking to secure the concession for building the Baghdad Railway, which it received in 1898-99.

1. Covering letter to the annotated Actes 1874 addressed to Baron Hirsch

The signee is almost certainly Emile Bernheim, chief engineer on the Belovo Vakarel line, who has made the corrections asked by the Direction Generale des Chemins de Fer (pp. 57-118), drawing attention to the need to examine Article 13 on tender specifications, and explains that Articles 25 and 26 have not been changed because the Minister would like to work on them himself. (Article 25 enabled the Compagnie to exploit significant areas of forest and land without paying compensation. Article 26 empowered the Porte to place agents at frontier stations to inspect goods and collect duties.)

1. Convention entre le Gouvernement Imperial et la Societe Imperial des Chemins de fer de la Turquie d'Europe: Signed by Hirsch as Chair of Societe Imperial and Mahmoud Paca with Annexe C relating to operations by Earle for the Compagnie. The Porte takes back the concession of 1869, and pays Societe Imperial to build six lines up to 1, 250 km at a rate of 72,727 francs per km with provisos regarding non-state land, location of management offices, railway stations, customs posts etc. (1) Constantinople to Andrinople, 2) Dedeaghatch to Andrinople, 3) Salonique to Mitrowica, 4) Andrinople to Sarambey, 5) Bajnaluka to the Austrian frontier, and 6) Hermanli environs to lamboli environs, the exact route of which to be proposed by the Societe Imperial (Article 2, Annexe A Article 2).

2. Convention d'Exploitation (heavily annotated): Signed by Earle and Mahmoud Paça. The Compagnie will operate the lines, pay a royalty to, and split revenues with the Porte; the Porte will build supporting roads and take responsibility for the consequences on operations of acts of war or political disturbance. Annexe A: Cahier des Charges empowers the Compagnie to collect and set charges; establishes Compagnie responsibility for infrastructure and rolling stock, and the Porte for policing and safety; covers transport of soldiers, seamen, prisoners and guards, officials and security personnel, mail, telegraph, police and customs posts, construction materials, free exploitation of certain state land and resources, inspectors, and arbitration. Annexes cover tariffs, baggage, dogs, livestock, merchandise, regulations for police and Imperial Commissioners etc. Annexe B relates to the lease to the Compagnie of the Varna-Rustchuk line from 1 July 1873.

4. Convention relative aux carrieres, mines et forets: signed by Mahmoud Paça and Hirsch, confirming return of the concession to the Porte, and, for an annual subscription of 50,000 francs, he and his successors to receive a 30 km plot of state forest around Belowa or Maritza for personal use for 35 years, after which the land and any developments revert to the Porte without charge.

5. Reglement du Controle commun: signed by Mahmoud Paça, Hirsch, and Earle. This describes the appointment, responsibilities and reporting requirements of a joint Director of Control.

"mejliss(?)" may be "meclis" (Meclis-i Vukela Council of Ministers). This advised the Grand Vizir and Sultan, approved budgets and part of the legislative process, and could initiate legislation. 3 pp. in French in an elegant calligraphic hand on folded squared paper (210 x 310 mm). Unsigned, no recipient indicated, and undated, but probably also by Bernheim to Hirsch after 18 Nov 1887. This explains changes made by the Minister of Public Works to Articles 13, 14, 23, 25, 26, 28, 29, 30, and 32 in the Convention d'Exploitation. As they include the Articles flagged by Bernheim (item 1), he probably prepared this for Hirsch following ministerial comments.

Signed by Ottoman Finance Minister Zihni Effendi and Otto Kuhlmann (director general) and Charles Morawitz (finance director) for the Compagnie. This confirms the one off advance of 23 million francs to the Porte. Terms and conditions include reduced line rental of 1,500 francs per km. It includes an explanatory letter from Kevork (head of the translation bureau) and French correspondence to the Minister, dated 15/27 Fevrier 1886. The purpose of funding the above-mentioned military response to Bulgaria's seizure of Eastern Rumelia is not stated.

Covering letter to the annotated Actes 1874 document addressed to Baron Hirsch (1887). [With:] Actes 1874 covering the revised 1872 agreements, annotated in 1887 for Baron Hirsch. [With:] Further amendments from the Ottoman Minister of Works for Hirsch (c. 1887-88). [With:] Agreement to advance funds to the Sublime Porte (to finance a military response to Bulgarian annexation of Eastern Rumelia) (1885-86)