Skip to the beginning of the images gallery
(AMERICAN JUDAICA.)

calculated For the Year of our Lord 1782, From the Creation of the World, 5786, And of the Julian Period, 6495; being the Second after Bissextile or Leap-Year. 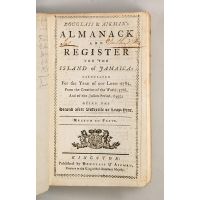 92 pages, plus 5 leaves unpaginated of currency conversion tables, the almanac proper entirely interleaved with blanks, and 34 blanks at the rear.

Somewhat worn and a touch stained, upper joint starting at the tail, short split at the tail of the fold of the flap, internal binding a little cracked after the final leaf of the text, spine correspondingly creased and just starting, light browning, but overall a very good copy in excellent unrestored contemporary condition.