from Drawings Made on the Spot … With Historical Descriptions by William Brockedon, F.R.S. Lithographed by Louis Haghe. 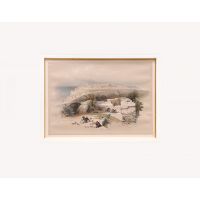 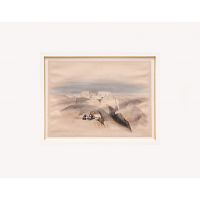 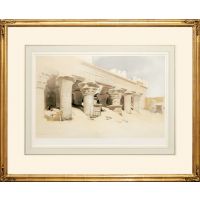 First edition, in the preferred deluxe coloured format, of "one of the most important and elaborate ventures of 19th-century publishing... the apotheosis of the tinted lithograph" (Abbey Travel). No publication before this had presented so comprehensive a series of views of the monuments, landscape, and people of the Near East. Representing the completion of a project begun in 1842, but a discrete work in its own right, Egypt & Nubia was published in three formats between 1846 and 1849, with the deluxe coloured-and-mounted format offered at triple the price of the simplest format.

David Roberts, RA (1796-1864), enjoyed a wide popularity in his day for his European views, but it is on the outstanding success of this project that the modern appreciation of his work is based. In August 1838 he arrived in Alexandria to start a carefully planned enterprise. It is claimed that he was the first European to have unlimited access to the mosques in Cairo, under the proviso that he did not commit desecration by using brushes made from hog's bristle. Leaving Cairo, he sailed up the Nile to record the monuments represented in the Egypt & Nubia division of the work, travelling as far as Wadi Halfa and the Second Cataract. At the time of publication it was these views that excited the most widespread enthusiasm.

Roberts had already discussed publication of the views with Finden before leaving for the Near East, but on his return both Finden and Murray, who was also approached, baulked at the risks involved in a publication of the size and grandeur envisaged. However, Francis Graham Moon - "a self-made man from a modest background" (ODNB) who had attracted the attention of the queen and ventured to represent himself as 'Publisher in Ordinary to her Majesty' - accepted the challenge, and persuaded Louis Haghe to lithograph Roberts's drawings. Roberts acknowledged that Haghe's work was hardly less important than his own, complimenting his "masterly vigour and boldness." The burdensome demands of the task may have even prompted Haghe's early retirement as a lithographer. The Reverend George Croly (1780-1860), poet and well-known contributor to Blackwood's and The Literary Gazette, was engaged to edit the text from Roberts's journal. This was "undoubtedly the most costly and lavish, and potentially risky, publishing enterprise that Moon had ever undertaken".

As a promotional tool, an exhibition of the original drawings was opened in London in 1840 and subsequently toured the country, creating a considerable stir and drawing praise from Ruskin who described them as "faithful and laborious beyond any outlines from nature I have ever seen." The exhibition catalogue also served as a prospectus for the projected work, and was apparently very successful in bringing forward subscribers, without whom any work of this size would have been doomed. The work was subsequently published in a variety of smaller formats. In a dramatic gesture, the lithographic stones for the original large format work were broken at an auction of the remaining plates in December 1853 so that the originals could never be reproduced.

Widely recognised at the ultimate expression of tinted lithography, an artistic and commercial triumph, Roberts's Egypt & Nubia was the result of a uniquely fortuitous collaboration between artist, publisher and engraver. This is a conspicuous survival in the original parts - the delicate gutta percha bindings of which are susceptible to wear and tear - in the preferred state with exquisite hand-colouring.