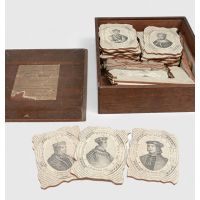 A complete example of "the earliest dated jigsaw puzzle, apart from maps" (Hannas, pp. 93-94), presumably a reissue from its first appearance in 1787, housed in the publisher's wooden box. Created as a learning aid for children, the puzzle's instructions read: "Directions. 1. Learn to put the heads together in succession. 2. Get the dates of the inner ovals & the houses of the respective kings. 3. Learn the names of the principal personages of each reign separately. 4. Get by heart the historical & chronological facts of the respective reigns with the dates of battles, treaties &c." The two lines of text above the imprint on the lower edge of the puzzle explain the various contractions used in the text (K. for "King", Pr. for "Prince"). A 1788 publisher's catalogue advertises the set as "Price 4s. 6d. printed on a royal Sheet, or 10s. 6d. dissected, and pasted on Mahogany, with a Box, complete". The present example has a different label to the first issue of 1787, with a different publisher's address and overall design. It also differs in the number of pieces: the first issue numbers 42 pieces total (32 medallion portraits and 10 border pieces; see the Cotsen Children's Library set at Princeton for the first issue).
In the second half of the 18th century, dissected maps became very popular for teaching geography. The London cartographer John Spilsbury is credited as the inventor of the first jigsaw puzzle during the mid-1760s, the first being a map of Europe mounted on mahogany and cut into separate countries. These were relatively expensive productions as they used hardwood, were handcut, and housed in carefully made boxes. In the wake of Spilsbury's success a number of other publishers began to publish similar educational games, including William Darton (1755-1819). "The name of Darton is threaded through the long history of children's literature, and is still current" (p. 228). A writer, printer, bookseller, stationer, and engraver, he specialized in educational books and is perhaps best known for publishing the present work in collaboration with the schoolmaster John Hewlett (1762-1844).
Sets of Hewlett and Darton's Engravings are recorded as having appeared eight times at auction, but of those only one is listed as complete: the others lack pieces, have blank pieces supplied, or lack small portions of the lid. WorldCat also locates sets at Toronto (lacking the border and Edward III pieces) and Yale.

Engraving on buff paper mounted on wood (60 x 42.5 cm), cut into 46 pieces; the illustration comprising 32 medallion portraits of English monarchs, from William I to George II, surrounded by relevant dates, persons, or notable events of each reign on 14 border pieces. Housed in the original wooden box, sliding lid with engraved paper label to centre.

Paper soiled with the occasional mark and area of cockling, top left corner piece slightly warped and broken in one place, medallion pieces for William I and Edward V similarly warped. A scarce survival in remarkably good condition.