Skip to the beginning of the images gallery
DUPUGET, Edme-Jean-Antoine. 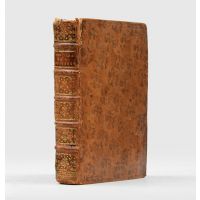 A handsome and highly interesting manuscript. The first published edition was issued by Arckstée & Merkus in Amsterdam in 1771, credited to "un Officier du Corps," the author previously identified by Barbier as Edme-Jean-Antoine Du Puget. Du Puget (1742-1802) was a member of an old aristocratic family from Bresse and was introduced to the corps by his uncle Joseph-Etienne Dupuget, who was an officer. He distinguished himself in the war in Corsica receiving the Croix de Saint-Louis and being advanced to the rank of marechal de camp. Shortly afterwards he was made inspector-general of the forces in America, and spent two years overseas, returning to become assistant instructor to the dauphin, for which services he was made a count. On the death of his pupil he retired to Amiens occupying himself with "ses paisibles études" (Michaud) until arrested and imprisoned during the Revolution. On his release he withdrew with his family to his estate at d'Hargicourt, but driven by his thirst for knowledge returned to Paris to study at the School of Mining. He died there aged 60.
This study was evidently very well thought of, circulating in manuscript before it was finally published. There are copies in the Library of the Society of the Cincinnati and at Nantes, all of which seem to vary slightly, both from the printed text and from each other. The published form lacks the dissertation on the prerogative of officers in the placing of batteries, pp.125-138, also his comments of siege craft at pp. 152-153 and the entire appendix "Memoire sur la Machine", pp.288-294 and accompanying plate. A comparison with the Nantes manuscript, which is dated 1760, shows that it lacks the "Memoire sur la Construction des Batteries", the appendix is registered as a separate item, and the three plates are printed and uncoloured.
Perhaps a traditionalist in some of his views, he defends the position of artillery against Folard's innovations, but is progressive in others, calling for a broad-based education for artillerymen, "bien d'autres etudes que celle de la guerre, et de la mechanique. On ne peut esperer d'y parvenir avec distinction, si l'on ne joint a ces premieres sciences, la phisique; les plus interessantes parties de la chimie, la geographie, l'art de fortifier, auant aux profiles et la direction des feux; l'architecture civile; et l'hydrostatique et l'hydraulique, en tout ce qui peut concerner les operation de la guerre... pour le dire en peu de mots, la vie d'un bon officiers de Corps Royale, est une etude perpetuelle." Like his own, the life of an artillery officer should be one of perpetual study.

4 folding coloured plates and one uncoloured.