Skip to the beginning of the images gallery
HUME, David.

[Essays and Treatises on Several Subjects.] 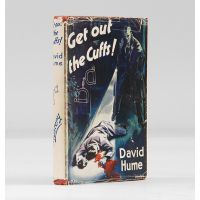 Get Out the Cuffs 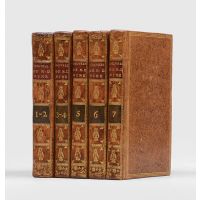 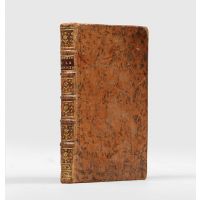 An attractive set of Hume's Essays and Treatises. Produced by reissuing and reprinting earlier separate editions in a new collected format, Essays and Treatises is a bibliographical nightmare at the best of times, produced by the "resetting of all separate volumes previously issued, the reissue of the earlier volumes with cancel titles and, where the cancels were not prepared in sufficient numbers, the further reissue of certain volumes with original titles still intact" (Todd p. 195). The present set would appear to be an unrecorded issue (the binding has similarities to trade bindings of the period), or the result of a contemporary owner compiling it himself, volumes 2 and 4 being without the general title pages of the published collected edition.
This set is comprised of the following volumes:
Vol. I: Essays Moral and Political. Fourth edition of 1753. Matches Todd issue a.
Vol. II: Philosophical Essays. Second edition, first issue of 1750. Does not conform to Todd, who calls for later issues of the edition with a new title page dated 1753, or the third edition of 1756. ESTC calls for a terminal errata leaf, here not present.
Vol. III: An Enquiry Concerning the Principles of Morals. Second edition of 1753. Matches Todd, following the issues of the 1751 edition with new title pages. With the terminal advertisement leaf present.
Vol. IV: Political Discourses. Second edition of 1752. Matches Todd issue b. Initial advertisement leaf present.
Provenance: fine contemporary armorial bookplates of W. Wynne, with motto in Welsh "ni bydd doeth na ddarilenno" (He will not be wise who will not read), possibly William Wynne DD (d. 1776) of Tower, near Mold, Flintshire; the arms (on a bend argent a lion passant) are correct for this branch of the Wynne family; he appears as a subscriber to a number of books in the 1750s and Pennant quotes his epitaph in A Tour in Wales (1778). Wynne, or another early owner, has written a page of commentary on Hume on the front free endpaper of the first volume: "Tho' this author a good deal offsets the air of candour and ingenuity, it is like a grimace; and upon the whole he rather perplexes then clears up truths. I believe, prides himself in the character of a refined & accomplished Deist. It shews more than ordinary affectation in setting forth familiar things with the pomp & pedantry of novelty & learning, & is in my opinion a most self sufficient, important coxcomb - Ld. Bolingbroke. He, and some other late writers sadly mistake their talents, when they quit political subjects to treat of morality." Also with the 20th-century bookplates of book seller and bibliographer John Stephens.

Get Out the Cuffs