Skip to the beginning of the images gallery
THE BANKER'S DAUGHTER. 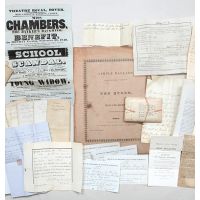 Together 42 items, which broadly fall into 3 categories: printed and handwritten material related to the bankruptcy of Chambers and Son and the family's subsequent financial situation, including a series of printed petitions, a brochure listing particulars for the auctioning of the family estate, with map, and an envelope of letters and sums tied with pink string (16); the performance career of Miss Chambers, including 3 broadsides advertising concerts, 6 performance licenses with affixed wax seals, an annotated theatre diagram, and 1 printed book, Simple Ballads (an engraved musical score by Miss Chambers, this copy charmingly extra-illustrated with vignette pen drawings) (14); and a variety of family documents, including copies of baptismal and marriage certificates, an obituary for Abraham Henry Chambers by Richard Oastler printed in the Morning Post, and several autograph notes and letters (12). Housed in a black flat-back solander box, Simple Ballads shelved separately.

Overall a well-preserved collection in very good condition, the papers sometimes creased from folding with occasional wear and tear, Simple Ballads professionally repaired along spine and corners, book block reattached. A full list of the contents is available on request.