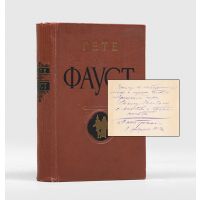 First edition of Pasternak's Russian translation of Goethe's masterpiece, presentation copy inscribed to a close friend and fellow poet, "to one of the most interesting people and the best poets of the present times, Simon Chikovani, with love and devotion, B. Pasternak, 9 February 1954", on the front free endpaper.
Chikovani (1902-1966) was a "lifelong friend of Pasternak" (Christopher Barnes, Boris Pasternak: A Literary Biography, vol. 2) and one of his closest contacts in Georgia. He was a leading Futurist poet, who "sported Mayakovsky's mantle" (according to Professor Donal Rayfield) and edited the H2SO4 journal. His brother was shot in the Great Purge in 1937, and Chikovani came progressively to toe the party line. By the time Pasternak was publishing Faust, Chikovani had become deputy to the Supreme Soviet council in Georgia, though the two remained good friends. This copy has frequent pencil markings, presumably Chikovani's, largely to the introduction and notes.
Pasternak was working on Dr Zhivago at this time, but was out of favour with Soviet censors and not permitted to publish his original work. A translation of a world classic such as Goethe's Faust, however, was acceptable, and so Pasternak produced this high creative rendering, first published in book form in 1953 and reprinted several times. He had previously translated Shakespeare's Hamlet in 1940, but it is Pasternak's Faust that carries the most considerable significance to his Zhivago. Most suggestively of all, the author's original subtitle for the novel, though later redacted, was "Opyt russkogo Fausta": A Russian Faust. Angela Livingstone, in her essay "Pasternak and Faust " (Forum for Modern Language Studies, volume XXVI, issue 4, 1 Oct 1990, pp.353369), contends that "the abandoned subtitle and many of Pasternak's remarks about Faust, show at the very least an intense preoccupation with Goethe's play and a tendency to conceive of his own and Zhivago's 'world' as 'Faustian'". Yurii Zhivago's own thoughts on Faust, moreover, appear within the novel in his notebook ponderings at Varykino.
Pasternak could not help but encode political critique into his translation, such as against Stalin's notorious canal-building projects resulting in the death of tens of thousands of gulag labourers - where Goethe's Baucius recounts the building of a canal, Pasternak renders a text that translates "Are human sacrifices / justified by a canal?", and even made none-too-subtle reference to Stalin in the line "Stali nuzhny dorzarezu...". Passages such as this were toned down in subsequent reprints.
When parts of the translations were first published, the text was attacked in the Soviet Journal Novy Mir in 1950, causing Pasternak, exasperated, to complain to a friend (the exiled daughter of Marina Tsvetaeva) of their "denouncing my Faust on the grounds that the gods, angels, witches, spirits, the madness of poor Gretchen, and everything 'irrational' has been rendered much too well, while Goethe's 'progressive' ideas (what are they?) have been glossed over."
The book is very scarce, with fewer than 20 copies listed by OCLC in libraries worldwide, and no other copies, inscribed or otherwise, traced in auction records.

Octavo. Original brown cloth, titles and decoration to spine and front in gilt, black, and blind, imprint and price blind to rear board. Housed in a brown quarter morocco solander box by the Chelsea Bindery.

Illustrated frontispiece and five plates, additional vignettes in the text, by A. Goncharova.

Minimal rubbing to ends and corners, but an excellent copy.