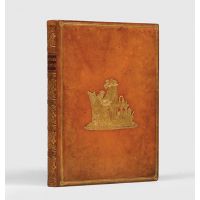 First edition in English of Goethe's Faust, translated by Samuel Taylor Coleridge. The book is most often met with in the publishers' reddish-brown paper boards, the flimsy backstrip having perished. This copy, however, has an attractive contemporary polished calf binding by the London binder Charles Murton, who Ramsden notes specialised in blind stamping. The covers are stamped in gilt with a large block, presumably made or commissioned by Murton, showing Faust in his study, in roughly similar style but by no means identical to the same scene in the book illustrations. As such a block would have been expensive to make, Murton may well have produced a number of these bindings, although we have not traced any other example.
When Faust, Part I first appeared in a finished form (1808) Coleridge expressed concern for the apparent immorality. Despite this, he briefly entertained a proposal in 1814 to translate the work, and returned to and completed the task in 1820-21. Coleridge denied that he ever "put pen to paper as translator of Faust", saying his reservation was "whether it became my moral character to render into English - and so far, certainly, lend my countenance to language - much of which I thought vulgar, licentious, and blasphemous", although he confessed that poetically it was "very pure and fine" (cited in Burwick, pp. 75-6). Despite his denial, the translation is now generally accepted as his, with letters from Goethe extant which state Coleridge as the translator. Coleridge only translated about a quarter of the play into verse, with the rest summarized in prose passages. He never attempted to translate Faust Part II, published in 1832 following Goethe's death.

Quarto (269 x 210 mm). Contemporary polished calf by Charles Murton of Soho, with his pink ticket, spine richly gilt in compartments between low wide bands, red morocco label, sides with a gilt border of one thick rule with two thin rules either side, each cover with a large central device of Faustus in his study blocked in gilt, flower-head tools at corners, curl marbled endpapers, gilt edges, green silk placemarker.

With 27 plates including frontispiece, engraved by Henry Moses from original copper etchings made by Moritz Retzsch for the German edition, with plain tissue guards. Bound without half-title.