Skip to the beginning of the images gallery
SCHLIEMANN, Heinrich. 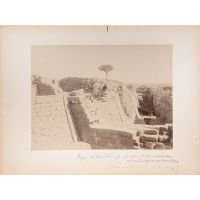 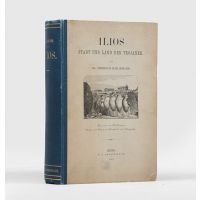 Fascinating, unpublished and extremely scarce archive of four original photographs from Schliemann's pioneering excavations at Troy and Mycenae, and another of Samothrace, where work was conducted by Schliemann's compatriot Alexander Conze (1831-1914). The three views taken at Troy (1871-73) show the massive outer walls of King Priam's city on the left and the Roman construction on the right. Two show minecarts in use on the system of narrow gauge rails set up by Schliemann to facilitate the removal of debris and all include members of the excavation team in situ and acting as staffage or figures placed to give a sense of scale. One of these is lettered on the image with a holograph key below, while two are marked in the negative "Tro. 567" and "Tro. 636". The captions to all of the images give informed technical information, such as "eastern fortress wall", "Troy: the great wall of the 6th (Mycenaean) layer", "Samothrace: western border of the holy district" (i.e. The Sanctuary of the Gods). These appear not to be in Schliemann's hand but are clearly by someone closely associated with the excavations at Troy, Mycenae and Samothrace. The images may be retained photographs from Schliemann's private collection; the group photograph taken at Mycenae is signed in the negative "Priv. 211" - presumably meaning "Privatgelände" or "Private", accompanied by a catalogue number.

The fine image captured at Mycenae (1874-76) is a superb group portrait set against the backdrop of the entrance to the Treasury of Atreus, also known as the Tomb of Agamemnon, one of Schliemann's most sensational finds. In front of the towering portal, the men and women of Schliemann's team are assembled, seated and standing, in dress more appropriate for the boulevards of northern Europe than the heat and dust of the Peloponnese; other figures are seated casually above the corbel arch; in the foreground lies a discarded parasol. The central figure may be Schliemann, albeit without the moustache that he customarily sported. The print is marked in the negative "Priv. 211".

"As a tool for visualizing stylistic affinities and cultural traits, photography could - at least in theory - act as an objective check upon the mediating presence of the artist's hand and could accord art forms of other cultures and time their singular expressive qualities. Most significantly, photography enabled scholars to discern the traits of art that were indicative of the essential character of a people, a connection that was exploited with the greatest consequences in the study of sculpture. Something of each of these visual strategies pursued by pioneer archaeological photographers is evident in the publication of Heinrich Schliemann's stunning discoveries. Few archaeologists could claim the success that Schliemann earned at Troy in 1871, and later at Mycenae, by trusting in the ancient texts Schliemann's excavations sought and found proof that myth and history might be one. An ambitious amateur with the financial resources to indulge his passions, Schliemann was familiar with the skepticism of learned scholars about his methods and motives. His excavation team included a photographer from the Dardanelles named Siebrecht, who was charged with documenting the lay of the land. Drawings of objects, trenches, and most of the finds were sent to Athens to be photographed by Panagos Zaphiropoulos To accompany his publication Trojanischer Alterthümer Trojan Antiquities (1874), Schliemann commissioned four hundred sets of an atlas containing 218 separately mounted, original photographs unveiling the Trojan discoveries. The publication was a bestseller, and the atlas doubtless fed the excitement evident in the popular press that the Homeric city of Priam had been brought back to light The plates portray rows of objects disposed on shelves... but this breaks off with a series of plates showing landscape sketches and views of excavations in progress, with structures coming to light as the layers of the mound of Hisarlik are peeled away For all their deficits, Siebrecht and Zaphiropoulos's photographs recount a nineteenth-century archaeological epic in a visual vocabulary that became the standard for subsequent field-excavation reports" (ibid.). The photographs by Siebrecht shown on the website of the Melton Prior Institute (meltonpriorinstitut.org) - landscape views of the site at Troy, as directed by Schliemann - do not resemble ours, which serve a far less generalised and more scientific purpose.

The view at Samothrace shows the Sanctuary of the Gods and was taken by a member of Alexander Conze's team in 1873-76, most probably the Austrian painter and photographer Wilhelm Burger (1844-1920), who, before joining Conze, had worked extensively in the Far East (Thailand, China and Japan). "While Schliemann was eager to vindicate his prehistoric speculations with the camera, other German scholars preferred to turn its lens toward the familiar refinements of Hellenism. The archaeologist Alexander Conze had been on hand for Charles Newton's Halicarnassus exhibition in Rome, but it was several years before he was ready to launch his own excavation. By comparison with the expeditionary photographs of most archaeologists in the eastern Mediterranean, those of Conze are recognized for the exceptional skill devoted to the task of site documentation. Conze excavated at the Sanctuary of the Great Gods at Samothrace in 1873-1875. He commissioned the photographer Wilhelm Burger to take pictures, which were later printed in Munich. Similar to Newton's illustrations of Halicarnassus, the Samothrace series presents site views of trenches with the foundations of the sanctuary appearing just beneath ground level. Tools, but only rarely workmen, are posed beside key features that offer proof of the architectural reconstruction Conze proposed" (Claire L. Lyons in Antiquity & Photography: Early Views of Ancient Mediterranean Sites, 2005, p. 47). In this view of the site strewn with fragments of columns, a workman acts as a scaling figure, with another group visible in the middle distance. Luminous-Lint comments that Burger's "large format works are rarely seen". Marked in the negative "Samoth. 15".

Heinrich Schliemann (1822-1890) remains one of the most remarkable and controversial figures of nineteenth century archaeology. "Assessments of Schliemann's work began to change even during his lifetime. It is clear from later research on Frank Calvert the Malta-born British archaeologist and his papers that Calvert deserves the lion's share of responsibility for siting Troy at Hisarlık. Schliemann's archaeological practices too left something to be desired. In his single-minded drive to discover Homer's Troy, he damaged and destroyed other layers of settlement. His self-promotion and methods of appropriation further cast doubt on his actual accomplishment, though his broadcasting of his various claims undoubtedly brought much greater general awareness of ancient history of the region. Schliemann was one of the first popularisers of archaeology. With his books and his dispatches to The Times, the Daily Telegraph, and other papers, he kept the world informed and excited by his archaeological findings as no one previously had been able to do. However unscrupulously, Schliemann became a symbol of the romance and excitement of archaeology" (Encyclopaedia Britannica).

Original photographic material relating to Schliemann's work - or that of Conze - is rare and we have not traced anything at auction. This small group of compelling prints may represent the only such archive in private hands. As exemplars from the dawn of archaeological photography they possess genuine immediacy.