Skip to the beginning of the images gallery
LIARDET, Francis. 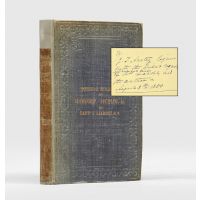 First edition, presentation copy, inscribed by the author "To Vice Admiral Sir B. W. Walker Bart K. C. B. With the Authors kind regards, and as a small mark of respect to a first rate officer. Royal Hospital Greenwich 5th June 1858" to the front free endpaper.
Sir Baldwin Wake Walker (1802-1876) was Surveyor and later comptroller of the Royal Navy during the Crimean War. He entered the navy in July 1812, was made a lieutenant in 1820, and after several years serving in Jamaica and the coasts of South America and West Africa, he began an extensive tour of the Mediterranean as first lieutenant aboard the bomb-vessel HMS Aetna. Walker was an able commander, receiving the Légion d'honneur and that of the Redeemer of Greece, and in 1838 he accepted a commission to command in the Turkish navy. It was in this capacity, whilst on expedition to the Syrian coast, that Walker likely met Liardet, who himself was patrolling the waters off Syria in command of the HMS Powerful, and who was present at the bombardment of Acre in 1840. In 1848 Walker was appointed Navy Surveyor and, with the Crimean War looming, became chief naval adviser to the first lord and responsible for the Royal Navy's warship construction programme during the 1850s naval arms race; the HMS Warrior and HMS Black Prince were built at his instigation. Despite Liardet's inscription here, Walker was a rear-admiral in 1858, having been awarded the rank on 5th January that year. He did not attain the rank of vice admiral until February 1865.
Francis Liardet's (1798-1860) had a similarly extensive and wide-ranging naval career, and is noted now for his three naval guidance manuals. He entered the navy in 1809 as a second class volunteer on the Mercury and, by the age of 14, had seen service in the Mediterranean, the coast of Africa, and the waters of North America. Liardet was appointed to command of the schooner Lion, in which he "destroyed several nests of pirates on the coast of Cuba, captured nine pirate vessels, some of their prizes, and a slaver" (ODNB). However while acting as agent for the New Zealand Company at Terenaki in 1841, Liardet was blinded by the accidental discharge of a small field piece, ending his active service, and he returned to England where he remained until his death at the Royal Naval Hospital, Greenwich.
"During his enforced retirement and afterwards Liardet wrote or dictated three books on points of professional guidance for naval officers", the third of which was this authoritative manual for junior lieutenants. The book provides direction for proper shipboard conduct, from the issuing of orders to the administration of punishments for unruly sailors.
An excellent copy of Liardet's manual, handsomely bound in a presentation binding and with an appealing association.