Skip to the beginning of the images gallery
HAYEK, Friedrich August von. 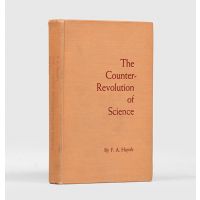 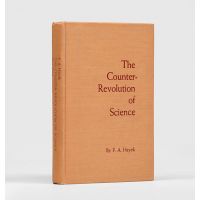 First edition of Hayek's first book, presentation copy, inscribed on the blank recto of the series title: "Herrn Privatdozenten Dr. Gottfried Haberler mit den freundschaftlichsten Grüßen und der Bitte, das Büchlein als vorläufige Erklärung und Rechtfertigung für mein langes Schweigen anzusehen. Wien, am 20.II.1929, F. A. Hayek" (To Professor Doctor Gottfried Haberler with friendliest greetings, and with the request to consider the booklet as an advance explanation and justification for my my long silence). With the ownership stamp of Gottfried Haberler, Harvard University, to the front free endpaper, and his occasional pencil corrections and annotations. Hayek's work was published as volume 1 of the Austrian Institute for Economic Research's series Beiträge zur Konjunkturforschung. The institute was founded by Ludwig von Mises, and Hayek was its Director from 1927 to 1931, when he moved to the London School of Economics. "On an invitation from Lionel Robbins, he lectured at the London School of Economics in 1931, and subsequently accepted the Tooke Chair. Hayek soon came to be a vigorous participant in the debates that raged in England during the 1930s concerning monetary, capital, and business-cycle theories and was a major figure in the celebrated controversies with John Maynard Keynes, Piero Sraffa and Frank H. Knight." (Roger W. Garrison and Israel M. Kirzner in The New Palgrave).
Gottfried Haberler (1900-1995) "studied at the University of Vienna under Friedrich von Wieser and Ludwig von Mises, where he received doctorates in law (1923) and economics (1925). After two years in the United States and Britain he returned to Vienna, received his Habilitation in 1928, and was appointed lecturer, later Professor of Economics, at the University of Vienna, from 1928 to 1936. He was appointed professor at Harvard University in 1936 where he remained until his retirement in 1971." (John S. Chipman in The New Palgrave).
With Haberler's annotations (mostly pencil underlining or side rules, with occasional marginalia in German or in shorthand) to pages xi, xii, 5, 21, 24, 25, 28, 29, 30, 31, 39, 54, 56, 69, 80, 81, 88, 95 & 97, with an ink marginal note to page 93, possibly in Hayek's hand.

Library label of the Max Planck Institute in Jena to front pastedown, with their cancelled stamp to title verso, tape mark to rear board. First and last leaves with cloth tape to the gutter. A very good copy with a splendid provenance.