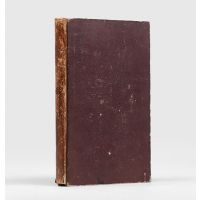 An entertaining Grand Tour diary, chatty and discursive. John Horatio Nelson (1825-1917) was great-nephew of the hero of Trafalgar, the second son of Thomas Bolton, who changed his surname on becoming the 2nd Earl Nelson. Born at Brickworth House, Whiteparish, Wiltshire, he was educated at Eton and Harrow, and Trinity College, Cambridge. He took holy orders and was curate (successively vicar and rector) of a number of livings in Sussex, Berkshire, Suffolk, Norfolk, and Wiltshire.
The 21-year old Nelson set out on 12 November 1846. His journal opens in breezy style: he takes the train from London to Dover and then crosses by packet to Calais in the company of "an agreeable Englishman who I found to be a government agent". He purchased this notebook in Paris, at the premises of the fashionable stationer Hippolyte Jeanbin, situated at number 2 place Vendome, "au coin de la rue St. Honoré". Naturally, he takes in Notre Dame and in the evening of that day - "having seen Ld Brougham in the Cafe" - he goes to dine and is "very curiously detained after dinner by a joke of a very amusing character. These were 3 Americans sitting near me one of whom, a very clever, & well informed man had a bottle of Champagne, & for his amusement shot the cork from the bottle at an elderly gentleman that was passing the other side of the table. Curious enough the gentleman stopped, & said his name was Partridge".
He fills the days with visits to the Louvre and various churches and in the evening dines at the table d'hôte. He then leaves for Chalons ("very heavy and filthy roads, & very bad horses") before taking a steam boat to Lyons. Then Arles to Marseilles and boat ("a bad one") to Genoa. Next is Lucca and Florence (including the Boboli Gardens with a "sharp frost" on the ground). He arrives in Rome on Christmas Eve ("a grand procession of the Pope"), but on Christmas Day morning is "not very well" but nevertheless hears a "very fine vespers" at Santa Maria Maggiore. A few days later he visits "some of the finest sculptors studios in Rome... and a very fine maker of cameos". The following day he and two friends take a trip out to the neoclassical Villa Torlonia where he finds the gardens "very cocknified".
Nelson attends at least two balls (one at the French ambassador's, where Lord Walpole introduces him to Count Pellegrino Rossi). There is much walking, riding and driving in the Borghese Gardens and looking at pictures and churches before finally leaving the Eternal City on the morning of 8 April 1847 "with much regret".
Two days later he is in Naples "which much struck me on entering from its fine & animated appearance after leaving Rome where one looks more for grandeur & silence amongst the ancient Ruins".
Next day he is off to Pompeii for the first of several excursions to the site. In the Bay of Naples he witnesses fisherman bringing in a catch of "swordfish & several small tunny fish, which are very curious-looking animals". One evening Vesuvius "vomited forth to peak advantage appearing like a grand display of fireworks with streams of lava running down the sides".
At the Museo Borbonico he makes a reference to his illustrious forebear Lord Nelson, when discussing the equestrian statue of Balbus: "which formerly stood at Portice Portici & when Ld Nelson bombarded the French who had possession of Portice a cannon shot struck off the head of the horse which was afterwards restored by Canova".
He then heads for home via Florence (where there is time for "strawberry ices" in the Parco delle Cascine). Bologna and Ferrara follow (where he goes to the "opera of Nebuchadnessar" - Verdi's Nabucco, first performed at La Scala, Milan, in 1842). The diary concludes at Lucerne where, naturally, he is much taken with the scenery but also goes to see the "famous sculptured lion" designed by Bertel Thorvaldsen.
A listing in the back gives a very useful itinerary, naming hotels accompanied by the occasional thumbnail detail ("bad cook", "2nd rate", "good beds", "nothing particular") and includes the Brunswick Hotel at Blackwall (a very fashionable spot in its day, noted for its excellent cuisine).
The increase in large scale rail travel opened up Europe to more and more people and lessened the exclusivity of the Grand Tour. This diary is a delightful example from the years of its lingering twilight.

Manuscript, with later elucidations almost certainly by the author.