Skip to the beginning of the images gallery
BLAEU, Willem & Jan. 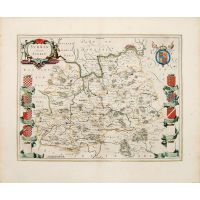 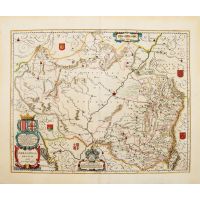 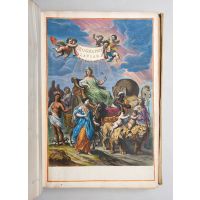 A particularly handsome set of "the greatest and finest atlas ever published" (Koeman). The Atlas Major as initially published in its various editions was the largest atlas ever published, the epitome of decades of achievement by the Blaeu family and published in five languages (Latin, Dutch, French, German, and Spanish). It was justly famed for its production values, its high typographic standard, and the quality of its engraving, ornamentation, binding and colouring. The atlas frequently served as the official gift of the Dutch Republic to princes and other authorities. It is one of the most lavish and highly prized of all 17th-century illustrated books, the maps embellished in the baroque style, many ranking among the most beautiful ever made.
"The contents of this unprecedented atlas illustrate the high standards of contemporary cartography and geographical knowledge, and its presentation bears witness to the superb craftsmanship of engraver, printer, binder and papermaker The costly atlas was in fact exclusively designed for those members of the patriciate who could command both the material and intellectual resources that were needed to buy it and appreciate it" (ibid.).
This present example is the Dutch edition, arranged quite differently from the Latin or French editions. It has its origins in Willem Blaeu's intention to publish a new 'international edition' of a world atlas, which was first announced on 11 February 1634 in an Amsterdam newspaper, the Courante uyt Italien ende Duytschlandt. This was a two-volume atlas published in four languages, with the German edition first to appear in 1634, and the Latin, Dutch, and French appearing in 1635. The first part of its Latin title, Theatrum Orbis Terrarum, deliberately echoed the previous efforts of Abraham Ortelius, while the following part of the title, Atlas Novus, emphasized that this was a new publication at the cutting-edge of cartographic knowledge. Willem planned two additional volumes, but these were only completed after his death, in 1640 and 1645. Willem's son, Jan, progressively expanded the Atlas Novus to six volumes by 1655, and this formed the first half of the Atlas Major. The Dutch edition, entitled Toonneel des Aerdrycks (Theatre of the World), is the most complicated in make-up, with the text being reset at least four times. Since it was the basis for the Grooten Atlas (Atlas Major) this has led to quite a different composition from the other language editions. For instance, while the Latin editions carry a uniform date, the present set varies considerably, with volumes I-III and IX dated 1664 and volume VII undated, while volumes IV-VI reuse Toonneel titles and are dated 1648, 1654, and 1650 respectively.
As Van der Krogt explains: "Joan Blaeu probably had a large stock of printed sheets of his latest Toonneel des Aerdrycks and did not want to discard them, nor to change in manuscript all the signatures and map numbers. Therefore he gave the maps, which were appearing in the Grooten Atlas for the first time, signatures and numbers which fitted them into those of the Toonneel... In this way volumes I to III of the Grooten Atlas are compiled from volume I of the Toonneel; volume VI from part I of volume II of the Toonneel; volume VII from volume III; volume VIII from part II of volume II (except Asia); and volume IX from the maps of Asia part II of volume II, to which the atlas of China (volume VI of the Toonneel) was added. Volumes IV and V are identical to their corresponding volumes of the Toonneel" (II, p. 383). The present set seems to be one of the early variants identified by Van der Krogt, updating early editions of volumes IV, VII and IX from the Toonneel (see Van der Krogt II, p. 383).