Skip to the beginning of the images gallery
STRANGE, T. Bland. 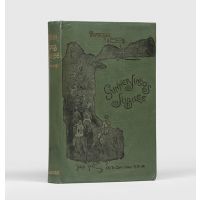 Second edition, as stated on the half-title and by a short note at the end of the preface remarking, "in correcting this Second Edition, I have to thank my old comrade, Major-General F. T. Whinyates, R. A., for his kind correction of many slipshod mistakes, but much slang has been left for which he is not responsible"; first published the preceding year.

Gunner Jingo's Jubilee is summarily dismissed by Sorsky as "supposedly an autobiography", although Ladendorf is more forgiving, "the life story of a heroic English soldier". Strange was commissioned into the Royal Artillery in 1851 and was posted to Gibraltar and Jamaica, where he contracted yellow fever, nearly dying, and consequently missing out on active service in the Crimean War. "His luck was better in 1857 when the next crisis arose. Strange was in the first group of reinforcements rushed to India when the East India Company's Bengal army mutinied. He arrived in Calcutta on 11 Oct. 1857 and proceeded quickly to Benares (Varanasi), the headquarters for suppression of the rebellion. Here he was a willing, if not enthusiastic, participant in the gruesome executions of some mutineers who were tied to the mouths of cannon and literally blown away. More conventional service followed. He did well enough in the months of savage fighting that led up to the fall of Lucknow on 21 March 1858 to receive four mentions in dispatches and promotion to captain in September. He participated in mopping up operations until exhaustion brought on a severe attack of fever. Following his recovery he served in the Punjab for two years" (Dictionary of Canadian Biography). He was subsequently on the instructional staff at Woolwich, before accepting command of the newly-established School of Gunnery in Quebec, and the "following year, he was made an inspector of artillery and warlike stores. These jobs involved organizing Canada's first permanent military units" (ibid.). Forced into retirement at 51, he turned to ranching east of Calgary, but when Riel's Rebellion broke out in 1885 he was asked by the minister of militia and defence, Adolphe-Philippe Caron, a friend from his days in Quebec to organize the defence of Alberta. Following the suppression of the rebellion, Strange returned to his ranch, but he had his leg broken when kicked by a horse, and his pension was revoked as he had been paid for his services in Alberta. He returned to England, fought for the restitution of his pension, and worked as a Maxim gun salesman. He died in 1925. "The title of Strange's autobiography, Gunner Jingo's Jubilee, accurately sums up his character. He was flamboyantly racist and militarist even by the standards of the time. He was also intelligent, courageous, and very good at his chosen profession, and he played a significant role in imparting a sense of professionalism and technical competence to Canada's first permanent military units" (ibid.).

Provenance: neat ownership inscription on recto of dedication leaf, "A. D. H. Grayson, July 1894". Captain A. D. H. Grayson, RA, served with the Royal West African Frontier Force in the Ikwe country of Southern Nigeria during operations in 1902. He was killed in action at Festubert on 13 October 1914.

Frontispiece and 13 other plates, 4 maps, one folding, 3 full-page, illustrations to the text.

Binding skilfully refurbished, extremities of spine and corners consolidated, gilt lettering retouched, half-title creased and a little foxed. A good, bright copy, with the 8-pages of publisher's advertisements at the end.