Hamlet, Prince of Denmark: a Tragedy.

[Bound third in a volume, together with 2 other Dublin editions of Shakespeare: Macbeth and Henry VIII; also 2 by Henry Fielding and 1 by Colley Cibber.] 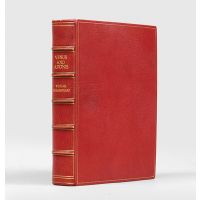 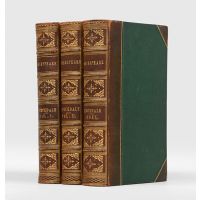 Second Dublin edition of Hamlet, following the first of 1721, which is notable for being the first printing of Shakespeare outside his native country, together with the first Dublin editions of Macbeth (1723) and Henry VIII (1734).
Having moved from Scotland to Dublin some years earlier, George Grierson (c. 1680-1753) set up his own printing house in 1720. The Irish Parliament had not adopted as law in Ireland the provisions of the British Copyright Act of 1709, and Dublin booksellers could legally reprint any new publication first published in London without having to pay for copy. Grierson was later the king's printer in Ireland, so hardly a disreputable book pirate. Both Hamlet (1721) and Macbeth (1723) show that Grierson was active in publishing Shakespeare in Dublin before Pope's edition of 1725, though Grierson was quick to use Pope's text as the basis for his collected edition of 1726, the first of Shakespeare published in Ireland.
The volume contains:
a) SHAKESPEARE, William. The Tragedy of Macbeth. Dublin: for George Ewing, 1723.
First Dublin edition. Duodecimo in half-sheets, pp. 66, 2; collates A-E6 F3. Sigs. B1-C6 torn at foot with significant loss to lower 10 lines of text either side, F1 torn at lower inner corner with loss of text at ends of 9 lines.
b) SHAKESPEARE, William. King Henry VIII Dublin: printed by S. Powell, for J. Leathley, T. Thornton, A. Bradley, and T. Moore, 1734.
First Dublin edition. Duodecimo in 8s and 4s, pp. 2, 69, 1 blank: collates A-F8.4. Lacks A1 (title), sigs. C7-8 torn at upper outer corner with loss affecting 14 lines in total.
c) SHAKESPEARE, William. Hamlet, Prince of Denmark: a Tragedy. Dublin: by George Grierson, 1725.
Second Dublin edition, following the first of 1721. Octavo, pp. 107, 5 (blank recto and two final advert leaves); collates A-G8, complete. Small hole in C3, touching two letters on recto only.
d) FIELDING, Henry. The Miser. A Comedy. Taken from Plautus and Moliere. As it is acted at the Theatre-Royal in Drury-Lane, by His Majesty's Servants. Dublin: printed by S. Powell, for George Risk, George Ewing, and William Smith, 1733.
First Dublin edition. Duodecimo, pp. 87, 9 (blank recto and four final advert leaves); collates A-D12, complete. Ink stains in gutter affecting all through to B1 at stab-holes, strongest at Dedication spread, A2v-3r.
e) CIBBER, Colley. Love makes a Man: or, The Fop's Fortune Dublin: printed by S. Powell, for George Risk, 1731.
Second Dublin edition, following the first of 1722. Duodecimo, pp. 83, 1 blank; collates A-D6. Lacks A1 (title), sig. A2 torn across without loss, D6 (final leaf) torn across, slightly affecting a couple of words on recto but not the sense, and with loss to two lines of the Epilogue on verso.
f) FIELDING, Henry. Pasquin. A Dramatick Satire on the Times: being the Rehearsal of Two Plays, viz. A Comedy call'd, The Election; And a Tragedy call'd, The Life and Death of Common-Sense. As it is Acted in the Haymarket. Dublin: printed by S. Powell, for for George Risk, George Ewing, and William Smith, 1736.
First Dublin edition. Octavo, pp. 4, 63, 1; collates A-D8, E2. Lacks E2 (final leaf, with concluding text on recto, verso blank).

All except the Fielding Miser are defective to some degree, as detailed below; the volume as a whole in poor condition, interesting none the less for showing the contemporary appetite in Dublin for play-texts from London stage productions.