Skip to the beginning of the images gallery
WHEELER, James Talboys.

Exhibiting the Principal Contents of the Various Public Records and other Works connected with the Subject in a Condensed and Classified Form, in Accordance with a Resolution of the Government of India.

Printed for the Madras Government by Messrs. Pharoah and Co., Athenaeum Press, Madras , 1862 Stock Code: 96950
£850.00
On display in 100 Fulham Road
Add to Wish List View Wishlist
By the same author 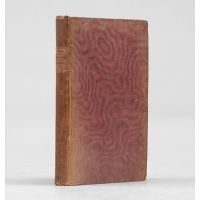 First edition. Fairly uncommon, just 16 locations worldwide on OCLC. An official publication compiled at a crisis point for the English cotton trade. The Lancashire Cotton Famine, the result of overproduction at a time of contracting markets and the interruption of imports due to the American Civil War, led to widespread hardship and unrest. One of the possible solutions was the encouragement of subsistence farmers in the colonies to switch to cotton production in order to replace the supply of premium Sea Island and Orleans cotton from America, and much of the present work consists of a summary of the findings of various official trials and enquiries into the cultivation of American strains and the employment of American techniques and equipment in India. The compiler, James Talboys Wheeler (1824-1897) travelled out to India in 1858 to become the editor of the Madras Spectator, but soon "abandoned journalism on being appointed professor of moral and mental philosophy in the Madras Presidency College in 1858" (ODNB). He there attracted the interest of the Madras government, and in 1960 became, in effect, their official historian, being "employed to examine the old records; the results of his researches being a report, highly commended by the secretary of state, Sir Charles Wood, and a 'History of Madras in the Olden Time.' In 1862 he was appointed assistant secretary to the government of India in the foreign department, and removed to Calcutta, where, among other duties, he had charge of the foreign and, later, of the home offices when the secretaries were at Simla. Among the printed but unpublished volumes which he compiled under orders of government were a memorandum on the Scinde ameers, summaries of political affairs from 1864 to 1869, of Afghan affairs in the eighteenth and nineteen centuries, and of Persian affairs, a valuable report on Afghan-Turkestan, and a memorandum on the Wahabis, all of which have been freely used by official writers as well as by others who had access to confidential documents". The present work was published in America in 1866 under the title of Madras versus America; A Handbook to Cotton Cultivation.

A little rubbed and sunned, particularly at the spine which is beginning to chip head and tail, short split to the cloth on the front joint, light browning and some foxing front and back, a very good copy.