Skip to the beginning of the images gallery
MALCOLM, Sir John. 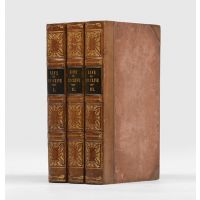 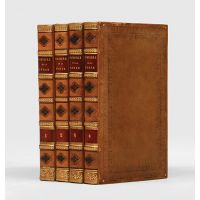 First edition in French of this "monumental work" by the diplomatist and administrator in India Sir John Malcolm (Wright, p. 8), originally published at London in two quarto volumes in 1815. The translation, by Pierre-Vincent Benoist, was continued from 1814 to 1820 by the eminent orientalist Louis-Matthieu Langlès, keeper of oriental manuscripts at the Bibliothèque Nationale and founding director of the Ecole des langues orientales vivantes in Paris. The "scapegrace and the scapegoat" of the very large family of a Scottish small farmer (Kaye, I, p. 5), the daring and adventurous Malcolm (1769-1833) made three diplomatic missions to Persia and on his third, in 1810, was received "with pomp and cordiality", developed a trusting relationship with the shah, and found time to introduce the potato to the country (known locally as "Malcolm's plum"). "His classic History of Persia, which appeared in 1815, brought him an honorary doctorate of laws from Oxford. Translated into French (1821), German (1830), and Persian (n.d.), the history was particularly valuable for contextualizing events surrounding his own time in Persia, and served as the standard western work for about a century" (ODNB).

This set presented in a choice binding by Thouvenin, described by the distinguished Italian bibliographer Federico Macchi as having "achieved a reputation as a leading binder of his epoch... whose name has been immortalised by mentions in the pages of Balzac and Stendhal... He admitted that for many years later, he was quite incapable of attaining the standard set by many English binders, notably Charles Lewis whose work was brought to him as models by his customers. Only by 1830 did he feel that he had obtained the necessary experience, and built up a team of binders which enabled him to compete successfully with English binders" (cited by British Library, Database of Bookbindings, retrieved 24 February 2020). The present elegantly restrained example of his craft could certainly be said to match the best English binding of the period and to attain that "Englishness" of style for which he strove so assiduously.

Some light abrasions to bindings. A particularly appealing set, with half-titles.