Skip to the beginning of the images gallery
PANASSIÉ, Hugues. 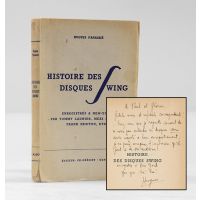 The original holograph manuscript of Histoire du vrai jazz (History of true jazz, published Paris, Éditions Robert Laffont, 1959) by the influential French jazz critic, historian and record producer Hugues Pannasié (1912-1974), here very attractively and imaginatively presented, the spine of the box labelled "La vraie histoire du jazz" ("The real history of jazz", the original working title).
"Pannasié was one of the French jazz community's chief philosophers and polemicists, and one of the individuals most dedicated to securing the place of jazz in France's entertainment repertoire. Pannasié's writings explained hot jazz to readers who did not know much about it or rarely distinguished between the different styles of jazz. His books and articles, presented with an irrepressible passion for the music, made him one of the most significant jazz critics of the age - not just in France but anywhere - and his work made a profound impression on many other fans and critics around the world" (Jeffrey H. Jackson, Making Jazz French: Music and Modern Life in Interwar Paris, 2003, p. 168).
In 1931 Panassié was co-founder, with Charles Delaunay, of the Hot Club de France, one of the earliest jazz fan clubs. He was also the founder of Le Jazz Hot magazine (1935) and the author of a series of historical, biographical and discographical studies. He was an ardent exponent of what he saw as "true" or "real" jazz, a music strictly rooted in the blues and the work of the New Orleans founding fathers. He had little time for the kind of dance band jazz popularized in the 1920s and 30s, describing it as "a commercial counterfeit of jazz, represented by such orchestras as Jack Hylton and Paul Whiteman" (The Real Jazz, 1942). When the bebop revolution ostensibly blew away the old order he gave it short shrift, famously dismissing the latest developments as "a form of music distinct from jazz". Or as critic Whitney Balliett put it: "Panassié ceased all forward critical motion around 1940" (American Musicians II: Seventy-Two Portraits in Jazz, 2005, p. 2). This is exemplified here in the blunt titling of Chapter XII: "Le Be-bop n'est pas du jazz" ("Be-bop is not jazz"). However, Panassié's influence on the reception of jazz in France, and in shaping the cross-cultural dialogue between American and French musicians, was seminal.
In his book, Panassié gives an overview of the music, from its origins in New Orleans through to the 1950s. In a short, 7-page, introduction (initialed "H.P.") he sets out the book's raison d'être: "Why 'real'? 'véritable' crossed through and 'vraie' (real) added in red ink. Because so many articles and books have been written confusing authentic jazz 'vrai' crossed through and 'authentique' added with false jazz, and relating the history of jazz so inexactly, that it is important to get things straight. This book is not about the history of what too many badly-informed people believe to be jazz, which has only the most superficial connection to the music, but rather the history of true jazz, the music of black Americans Jazz is the musical language of another race. We others, whites, can understand it, even speak it, provided that we take pains to learn it, to assimilate ourselves. It was through contact with black people that I learned what real jazz is. My conception of jazz is theirs..." (translated from the French). The work comprises: I. Les Origines du Jazz; II. Naissance du jazz à la Nouvelle-Orléans; III. Où l'on voit le jazz grandir several other possible titles struck through; IV. Chicago; V. Louis Armstrong; VI. Harlem; VII. Duke Ellington; VIII. Les années 1930-1936; IX. La période "swing" ou L'ère du swing; X. et XI. La Période Swing (II) et (III); XII. Le Be-bop n'est pas du jazz; XIII Renaissance Nouvelle-Orléans; XIV. Le jazz en France (partially typed); XV. Le Jazz des années 1950 "Le Jazz d'aujourd'hui" struck through.
This is a wonderfully active working manuscript, reflecting an almost improvisatory fervour during the writing process. There is much emendation, with many passages struck through by the author's looping deletion, or boldly with a red pencil. The first page of the introduction shows Pannasié turning over options for the book's title: "Histoire du vrai jazz," "La Véritable Histoire du jazz," and "La Vraie Histoire du jazz." Each chapter folder includes a short summarizing note in another hand, apparently that of an assistant. Chapter I includes seven pages in this hand; in one place Pannasié breaks off during a discussion of Big Bill Broonzy and remarks that his text will continue after "le morceau" (the piece) from the "Bulletin No. 15" (presumably Le Jazz Hot magazine), and this is followed by four pages in this facilitating hand, presumably transcribing the piece on Broonzy and "Joe Turner's Blues" that Pannasié references.
Hugues Pannasié was, despite his prejudices, one of the key European writers and thinkers on jazz during the 20th century and this vital manuscript holds a mirror up to his passion for the music. Whitney Balliett quotes Stephane Grappelli's succinct take on the man: "He was very sincere himself. He was a very pure man, very religious, very decent. Not for the gallery. He believed. He did a lot for the jazz music. The only bad thing about Panassié was he was a bit stubborn".