Skip to the beginning of the images gallery
CANTEMIR, Demetrie, voivode of Moldavia. 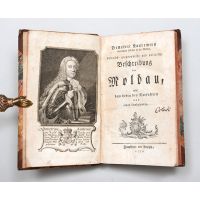 First and only contemporary edition, a very pretty copy with an appealing regional provenance of an important record, the first scholarly account of Moldavia and containing the first accurate map; uncommon, with just a single copy traced at auction, and eleven locations world-wide noted by WorldCat: three in the UK (BL, London, Oxford), two in the US (LoC and Northwestern), together with BnF and single copies in Switzerland, the Netherlands, Denmark, Hungary, and Romania.

Demetrie Cantemir (1673-1723) was the son of Constantin, the voivode of Moldavia. The family's origins lay with the Crimean Tatars, some believing that the name derived from "Can Temur", "the blood of Timur", signifying direct descent from the great Turco-Mongol conqueror. Despite his father's illiteracy, Demetrie received a thorough princely education, excelling in languages, apparently accruing 11 in total, including Turkish which he learned while living as an envoy-hostage in Constantinople and studying at the Patriarchate's Orthodox Greek Academy. He gained favour with the Sublime Porte, but when named voivode in 1710, seeing the Turks as a waning power, he allied himself with Peter the Great in his ill-fated Pruth River Campaign. Under the Treaty of Lutsk Peter was permitted to cross Moldavian territory and garrison troops there. Defeat at Stanilesti in July 1711 forced the Cantemirs into exile, Peter refusing to hand over his protégé and awarding him the title of knyaz, a status comparable to that which he had lost through his alliance with the Russians.

Settled in St Petersburg, "Kantemir wrote prolifically on Romanian and Ottoman history; his Historia Incrementorum atque Decrementorum aulae Othomanicae earned him a reputation throughout Europe. A keen student of Turkish culture and religion, he devised a system of notation for Turkish music and wrote a comprehensive synthesis of Islamic religious beliefs and practices. His other works include the first critical history of Moldavia-Walachia and the first comprehensive descriptions of Moldavia's geography, ethnography, and economy" (Britannica).

This last, the present work, was written in Latin 1714-6 at the request of the Berlin Academy which Cantemir had been invited to join in 1714. It was circulated extensively in manuscript for many years before finally being translated into German by Johann Ludwig Redslob in 1769 and published as here. The original manuscript of Description Moldaviae is in the BnF.

This copy with the contemporary bookplate and ownership inscription of Johann Baptist Graf Orlik Freiherr von Lazischka, together with the later Larisch-Moennich bookplate from the collection at their family seat in Solza on the Czech-Polish border, into which Orlik's library was absorbed at the beginning of the 19th century.