Skip to the beginning of the images gallery
FORSTER, Johann Reinhold.

Translated from the German... and elucidated by several new and original maps. 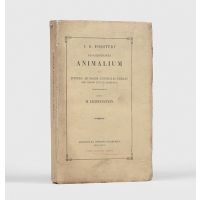 First edition in English, originally published in German in 1784. A comprehensive overview of northern explorations from ancient to modern times, including accounts of the English, French, Spanish, Portuguese, Dutch, Danish and Russian voyages in search of the Northwest and Northeast Passages from the earliest recorded explorations to 1780, including those of Cabot, Verazzano, Frobisher, Davis, Weymouth, Hudson, Fox, James, Cartier, Cook (mentioning all three voyages and an account of his death), Clerke and others. A distinguished naturalist, Forster was employed as Chief Naturalist for the Resolution on Cook's second voyage, accompanied by his son Georg (1754-1794) as an assistant; "the elder Forster proved to be a highly capable scientist and a keen observerhis works proved him a veritable genius in many disciplinesbut he had a disagreeable personality and alienated the expedition's staff" (Rosove). His son published an unofficial alternate account of Cook's voyage six weeks before Cook's own and made frequent, unacknowledged use of his journals, in addition to Johann's notes and his own recollections, provoking a pamphlet war with William Wales, the astronomer on the expedition, and Lord Sandwich, commissioner of the Admiralty.

Wear to edges, browning to endpapers, foxing to contents; a very good copy.