Skip to the beginning of the images gallery
(WOMEN'S SUFFRAGE; HUNGER STRIKES.) 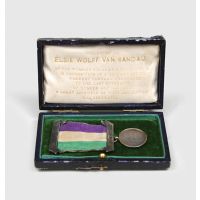 Hunger strike medal awarded by the WSPU to Elsie Wolff van Sandau, complete with the original presentation box, the printed dedication on the silk-lined inner lid reading, "Presented to Elsie Wolff van Sandau by the Women's Social and Political Union in recognition of a gallant action, whereby through endurance to the last extremity of hunger and hardship a great principle of political justice was vindicated".

Elsie presents an elusive figure. No lifetime dates have been traced. Her brief entry in the Women's Suffrage database (with data taken from the 1866 Suffrage Petition and 1914 Home Office arrest records) merely confirms her gender and that she had an arrest record. The National Archives ledger HO 45/24665: Suffragettes: Amnesty of August 1914: Index of Women Arrested, 19061914 records the arrest as "Sandau Van Elsie Wolf. Bow St. 12/3/12", using a variant spelling of her name. She is not mentioned in the major suffrage reference works nor in established biographical resources such as ODNB. The present medal establishes Elsie's participation in the protest meeting of 4 March 1911 as called for by Emmeline Pankhurst: "Men and women I invite you to come to Parliament Square on Monday, March 4th 1912 at 8 o'clock to take part in a great protest meeting against the government's refusal to include women in their reform Bill. Speeches will be delivered by well-known Suffragettes, who want to enlist your sympathy and help in the great battle they are fighting for human liberty". The meeting disintegrated into a window-smashing campaign, during which more than 150 women armed with hammers and stones attacked the shops and offices of Covent Garden. Over 126 women were committed for trial; the sentences meted out ranged from fourteen days to six months. Evidently Elsie took part, was imprisoned, and subsequently chose to go on hunger strike. Her actions were honoured by the WSPU with this medal.

Confirming Elsie's identity and the actions assigned to her is made all the more difficult by the appearance in records of one Matilda (or Mathilde/Matilde) Wolff (or Wood) van (or von) Sandau, accorded a similar variety of spellings. The Suffrage database lists "Miss Matilda Wolff van Sandau" as a single female musician with an arrest record; the corresponding entry in the National Archives ledger records the arrest of "Van Sandau, Matilda Wood" for "Westminster 14/2/07" and "Bow St. 19/11/10". The latter arrest is mentioned in an article on "Suffrage Raiders" in The Times of 19 November 1910, in which "Miss Wolff Von Sandau, granddaughter of Dr. E. Schwabe, private chaplain to the late Duchess of Kent" is mentioned. (It is worth noting here that the Suffrage database also includes a "Mathilde Schwabe", listed in the 1866 petition for Victoria Park, Manchester.) Matilda's name is included on the Roll of Honour of Suffragette Prisoners 1905-1914, also at the National Archives. A Post Office Directory for 1902 lists "Miss Mathilde Wolff van Sandau" as a professor of music living at 16 Nevern Road in Kensington, London; a 1905 Post Office Directory locates her at the same address. One "Matilde van Sandau" has also been linked with the early women's chess and vegetarian movements: contemporary records credit her with establishing the Ladies' Chess Club in London, as the Secretary of the Brighton and Hove Vegetarian Society, and as part of the 4th International Congress of the International Vegetarian Union (1897). Two American newspapers of 1900 - the New Jersey Asbury Park Daily Press and The Montgomery Advertiser - dedicate paragraphs to "Miss Mathilde Wolff Van Landau" (the latter spelling it "Landaw"), a "highly gifted woman, Dutch by birth, English by residence" with the same organizational ties, reporting on her recent foundation of a Fruit and Flower League in Alabama.

A recent Wikipedia page created for "Elsie and Mathilde Wolff Van Sandau" assuredly identifies them as "British suffragette sisters". Given the uncommon names and their obvious shared enthusiasm for the more militant aspects of the women's suffrage campaign, this - or another close familial relationship - is highly likely. The definitive statements made within the article, however, do not take into consideration the obfuscation of facts - perhaps intentional - that surrounds both figures. Confusion in ascertaining which life is Elsie's and which Matilda's has arisen from non-specific references in contemporary documents to "Miss Wolff van Sandau", such as those made in an undated Roll Call of Prisoners, and in the aforementioned Times article, whose mention of a van Sandau has been variously attributed to both Elsie and Matilda. From such sources it has been extrapolated that Elsie was arrested on 18 November 1910 following the infamous Black Friday riots but, given Matilda's arrest record of 19 November, this is almost certainly a reference to her. A policeman's testimony of the events of the evening of 4 March 1912 recorded following "Miss Wolff van Sandau" and Miss Katie Mills breaking the windows of the Howick Street Post Office: in some cases this has been clarified to mean Matilda, but there appears to be no evidence to decisively distinguish either way. Bearing all this in mind, one can conclude that the van Sandaus preferred to work within deliberately blurred identities. Certainly in the case of Matilda, the sheer variety of names and the somewhat spurious, simultaneous associations with addresses and societies in the UK and America suggest that there was some calculated mismanagement of facts.

While Elsie, and by extension the context in which she and Matilda came to the women's suffrage movement, may remain enigmatic, her contribution to the cause and the WSPU's appreciation of her efforts is made clear with this medal.

First commissioned by the WSPU in 1909, the Medal for Valour, or Hunger Strike Medal, was "the crowning achievement" for a suffragette to earn (Florey 2019, p. 148). It was issued by London regalia and medal-makers Toye and Company of 57 Theobalds Road, who "were known for producing medals of various types for different organizations, and had a wide variety of enamelled products available for potential suffrage needs" (Florey 2013, p. 48). They also made pins for the WFL and the NWSPU. "Toye actually were proactive in approaching the WSPU they realized, even at this really early stage of the suffragette campaign, that here was a campaign group that was growing, that was thriving, that could possibly offer them a lot of business in the future Within months, Toye & Co. were making other items for the movement and the medals were sold by Toye to the WSPU for 1 each" (BBC Four interview, 2014). If the medal's ribbon terminated in a silver bar (as Elsie's does) this indicated the date of arrest; if it terminated in a three-colour enamelled bar, the engraved date was the day the recipient was force-fed. "When hunger strikers were released from prison, they were reminded to return their medals to headquarters so that additional bars could be added when they were incarcerated again" (Florey 2013, p. 53). The Canadian-born militant Mary Richardson, infamous as the slasher of the 'Rokeby' Venus, had a medal comprising five silver and four enamel bars, believed to be the greatest number of award bars given out by the WSPU.

Hunger strike medals are scarce on the market. Four others have appeared at auction since 2018, no doubt drawn to the fore by the 100th anniversary of women being given the right to vote in the UK. Unsurprisingly most examples are now housed in institutions; of those four, at least two - those of Selina Martin and Kate Evans - sold to the National Gallery of Victoria and the National Museum Wales respectively.

In very good condition, the presentation box particularly so, with the inside silk dedication remaining integral (sometimes seen detached). Metal a little tarnished, without the pin to attach, a little light wear to the box.