Skip to the beginning of the images gallery
POUND, Ezra.

Antheil and the Treatise of Harmony. 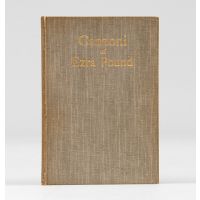 The Fifth Decad of Cantos

Antheil and the Treatise of Harmony with Supplementary Notes.

First edition, first printing, deluxe signed limited issue, number 46 of 50 copies printed on Japanese vellum and signed by the author. There were also 350 ordinary copies issued unsigned on Navarre, and 25 hors commerce. Imaginary Letters is one of the exquisitely produced books put out by the Black Sun Press, founded by the wild and wealthy avante-garde expatriate couple Harry and Caresse Crosby. Harry Crosby (1898-1929) was born the heir to one of Boston's wealthiest banking families, but after serving as an ambulance driver during the First World War he met and fell in love with a married lady, Mary Peabody (nee Jacob) - they fled to Paris, married, and she changed her name to Caresse. Harry and Caresse embedded themselves in the avant-garde cultural scene, befriending the likes of Dali, Hemingway and Cartier-Bresson, founded the Black Sun Press which helped to publish the early works of Joyce, Eliot, Pound and Hart Crane, and lived a life of utter dissolution off Harry's inheritance which, when it ran out, had to be supplemented by telegrams to his banker father such as the infamous, "PLEASE SELL 10,000 WORTH OF STOCK. WE HAVE DECIDED TO LIVE A MAD AND EXTRAVAGANT LIFE", (to which the father, reluctantly but nonetheless amazingly, assented). Following Crosby's death in 1929 (he was found shot dead in the same bed as Josephine, "The Fire Princess", one of his many lovers), the Black Sun Press continued issuing books in Paris and New York under the directorship of Caresse, who survived until 1970.

Minor chipping to spine ends, worm hole from the slipcase and front cover in to first five leaves, spine just coming away from quires at upper portion of front hinge and a little splitting along joint of wrapper, still a smart copy in very good condition.

Antheil and the Treatise of Harmony.

The Fifth Decad of Cantos

Antheil and the Treatise of Harmony with Supplementary Notes.