Skip to the beginning of the images gallery
HOMER. 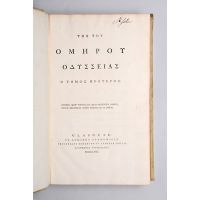 Editio princeps of the writings attributed to Homer, including the Iliad and the Odyssey, two of the earliest, most important and influential works of European literature. "The Iliad and the Odyssey are the first perfect poetry of the western world. They spring fully grown, their predecessors lost, and the magic has persisted ever since. The legends of the siege of Troy and the return of Odysseus are the common heritage of all The form, the action and the words have had incalculable influence on the form, action and words of poetry ever since; the composition of the Aeneid, the Divine Comedy, Paradise Lost, and many others, has been determined by the Iliad and the Odyssey. Their popularity never diminishes" (PMM).

This monumental printing is the first large-scale printing in Greek, and also probably the first Greek book printed in Florence. (The rare Erotemata by Emanuel Chrysoloras, which survives in only two copies, was printed in Florence either in 1475 or c.1488-94.) The editor Demetrius Chalcondylas was professor of Greek at the Florentine Studio from 1475 until 1491. The type is that of Demetrius Damilas, a scribe who had previously been active in the printing of Greek books in Milan since 1476. It was based on the handwriting of Michael Apostolis, which was simpler and more distinct than Damilas's own elegant but elaborate hand. The text of Homer was not printed again in Greek until Aldus's octavo edition of 1504, which was based directly on Chalcondylas's text. The Batrachomyomachia (Battle of the Frogs and Mice), a pseudo-Homeric text also included here with the Iliad, Odyssey, and Homeric Hymns, had been earlier printed in an unsigned Greek-Latin edition printed perhaps at Brescia or Ferrara, which is known only from the unique copy in the John Rylands University Library, Manchester.

Despite the lengthy and circumstantial colophon, bibliographers have had trouble in agreeing on the correct imprint and date. Robert Proctor (The Printing of Greek in the Fifteenth Century, 1900, p. 66 sqq.) argued that the edition was actually printed in the shop of Bartolommeo di Libri, whose type was used to print the dedication to Piero de' Medici on the first page. BMC assigned the edition rather to the Nerli brothers, but Roberto Ridolfi (La stampa a Firenze nel secolo XV, 1958, p. 95 sqq.) has pointed out that the Nerli were well-born and wealthy Florentines whose role would have been a purely financial one. He has instead assigned the Homer to the anonymous Florentine shop, the Printer of Virgil (Copinger 6061, Goff V183), which flourished from 1488 to 1490 or so. Ridolfi supposes that only the first, dedication page was printed in di Libri's shop, more than a month after the completion of the edition proper, this page hitherto having been planned as a blank.

With 16th-century annotations throughout, mainly in Latin and Greek, perhaps some in Italian. Binder's mistake resulting in preliminary leaves for the Iliad bound at the start of the Odyssey; blanks E10 and ETET6 not preserved. From the library of George Shuckburgh (1751-1804), a well-known English bibliophile who owned a Gutenberg Bible, the first to reach the United States; sold, through Goodspeed, to William Wyatt Barber, Jr, principal of St Mark School; auction, Christie's New York, 7 Dec. 2012 (lot 86). A beautiful copy.