Skip to the beginning of the images gallery
WOOLF, Virginia.

"Is Fiction an Art?" Hand-corrected typescript review of Aspects of Fiction by E. M. Forster. 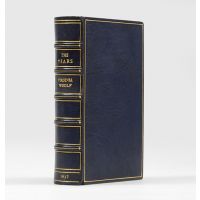 Original typescript draft with autograph corrections by Woolf of one of her most defining essays, by descent from the editor responsible for bringing the essay to publication, Geoffrey Parsons (1879-1956). Published in the New York Herald Tribune on Sunday, 16 October 1927, Woolf's review of E. M. Forster's Aspects of Fiction appeared on the first page of the Book section of the paper and continued on pages 5 and 6. The present typescript, complete save for three paragraphs (numbers three to six) of the final published text, is a scarce survival.
Notably, Woolf has crossed out her original title for the essay, "The Art of Fiction," at the head of page 1, and typed in the title as it was published, "Is Fiction an Art?" That addition, and the final two pages, are in blue typewriter ink; the remaining typescript is in black. The following month, Woolf revised the essay and returned to her original title of "The Art of Fiction" for its publication in Nation & Athenaeum on 12 November. In all, the manuscript contains 60 corrections.
Some of Woolf's corrections are telling, such as her change of the word "may" to "must" in a key passage, shifting the phrasing from the possibility of breaking rules to the necessity of doing: "if fiction is, as we suggest, in difficulties, it may be because nobody grasps her firmly and defines her severely. She has had no rules drawn up for her. And though rules may be wrong, and may changed in the manuscript to "must" be broken, they have this advantagethey confer dignity and order upon their subject; they admit her to a place in civilised society." Elsewhere, an oft-cited sentence from the essay "Why should a real chair be better than an imaginary elephant?" appears here as it was first written prior to her revision: "And how do you make out that a real chair is better than an imaginary elephant?"
"In terms of personal relationship, E. M. Forster was probably closer to Virginia Woolf than to any other contemporary novelist of comparable stature" (Das & Beer, p. 217). By the time of the publication of Forster's Aspects of Fiction, their complex literary relationship had evolved since his influential review of Woolf's first novel, The Voyage Out. Woolf had continued to see Forster as her senior in accomplishment until the mid-1920s, when Mrs. Dalloway established her as the equal of her friend; now, prior to the publication of Aspects of Fiction, Forster warily asked his editor "not to send Virginia Woolf the uncorrected proofs for a small reason; they contain a criticism of her own work which I have modified in the revise!!" (2 September 1927). Woolf "faulted E. M. Forster for valuing a simplistic notion of 'life' life' more than a formalist notion of art: 'the humane as opposed to the aesthetic view of fiction'... Although a critique of the aesthetic naivete of most English writers and of Forster's theories, 'The Art of Fiction' is also a defense of the formalist designs of Virginia's major fiction and a harbinger of the extreme Postimpressionist work she was envisaging" Reid, p. 309). Woolf's review nevertheless provoked a brief contretemps between the two: "her critical, even condescending analysis of Forster's method his elusive message, his failure to connect the bricks of realism with the inner soul... seems to incorporate something of her frustration with their relationship. 'We want to make Mr Forster stand and deliver'. 'We feel that something has failed us.' Forster was offended, and wrote to say so... At once she compared herself with him... 'I should have said that of all writers he would be the most indifferent & cool under criticism. And he minds a dozen more times than I do, who have the opposite reputation'" (Lee, p. 273).
Woolf typescripts are a rarity on the market, as it was her custom to destroy the English typescripts of her full-length works. "Virginia Woolf composed in longhand, writing in ink with an old-fashioned straight pen on the right-hand page of a manuscript book bound for her by the press... When she had completed the first draft of the novel, represented by a holograph and a slightly edited typescript, she would then retype the book from the beginning... The resulting typescript, probably bearing the marks of further revisions in ink, was given to Leonard for his critical reading. After this, Virginia would sometimes, as she did with The Waves, have a press secretary retype the text into a copy which she corrected for errors before sending it to R. & R. Clark later the Garden City Press to be set and printed. At some point after the proofs were corrected or after each book was published, Virginia would destroy her typescripts, saving only the holograph copy" (J. H. Willis, Jr., Leonard and Virginia Woolf as Publishers: The Hogarth Press 1917-1941). The nearest recent comparable to the present item is "Thoughts on Peace During an Air Raid," typescript with corrections, 1940, 8pp (sold Christie's, Nov 14, 2007, lot 56, 14,400 including commission), now held at the Harry Ransom Humanities Research Center at the University of Texas at Austin.

Some pages with glued additions, others shorter, some wear at edges and light surface soiling.