Skip to the beginning of the images gallery
CASTELLANE-MAJASTRE, Henri-César. 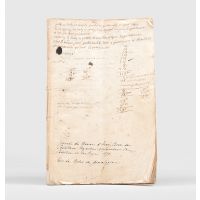 Born into the Provençal noble family with close ties to the sea, Henri-César de Castellane-Majastre, (1733-1789), was a career naval officer joining the service at the age of sixteen, ranking as lieutenant from 1762 to 1775, promoted captain 1777. He participated in the American War of Independence commanding the Marsellais, 74, in de Grasse's fleet, serving in the expedition to Martinique and playing a significant part in the decisive campaign leading to the capture of Cornwallis' army at Yorktown, including the actions on the Chesapeake in September, 1781 - for which he was commended by the admiral - and at Yorktown itself in October.

During the period of this log, which occupies the first 15 pages of the volume, Castellane, a "mere" lieutenant, had recently taken on a challenging, and moderately prestigious posting, commander-in-chief of the operations of the xebecs Le Singe & Le Chameleon against Barbary corsairs in the Mediterranean. In this rôle he directly followed the great admiral de Suffren, for whom it had also been his first command. Based at Toulon the vessels' mission was to patrol France's coastline between Montpellier (Sète) and Nice (Villefranche-sur-Mer), a stretch which included Marseille, France's leading military port. The log records the usual details of headings, weather, navigational observations &c., together with some more detailed commentary on Castellane's reconnaissance and defensive evolutions.

On 3 July he notes that he has been following the movements of 6 tartans in the area, and is therefore operating between the fort Tour Fondue, on the Giens peninsula near Hyères, and the Île de Porquerolles, ready to attack if necessary; "This anchorage permitted to me to chase any barbarians who might have approached our coasts". Tensions are clearly running high, three days later, "I saw a pink en route to take the anchorage, as he crossed my way and flew no colours, I fired on him", but this proves to be a false alarm, and the ship is allowed to continue on its way. The following day he rescues the crew of a tartane found drifting on fire, and on the 15th he reports having interrogated the master of a Spanish barque who told him that "he had seen nothing on the coasts of the cap de Creus peninsula in Catalonia, about 16 miles from the French border, and had heard no word of corsair activity". However he had just spotted "four Spanish xebecs under the command of the M. Dom Barceló passing the straits near Malaga". Don Antonio Barceló was a Majorcan admiral who was famous for his campaigns against Algerine privateers, including the two bombardments of Algiers, 1783 and 1784, and for his employment of floating batteries at the siege of Gibraltar.

The last 14 pages contain a compilation of genealogical notes also in Castellane's hand. These constitute the necessary proofs of a sufficient degree of nobility for him to apply for entry into the Ordre royal de Notre-Dame du Mont-Carmel et de Saint-Lazare de Jérusalem. A military-religious order with particular connections to the struggle against the Barbary corsairs, they armed two vessels out of St. Malo for the purpose, membership would have been more or less essential to Castellane for the furtherment of his career. Castellane-Majastre was inducted into the Society of the Cincinnati in October 1782, receiving a purse of 800 livres from them for his service. On October 1, 1784, he became chef d'escadre "in consideration of the campaign in America" (Histoire de L'ordre royal et militaire de Saint-Louis, II, p.196-7, for a good, if concise biographical account). A small archive of papers relating to his American service is held by the Clements Library.

An attractive document of the early career of a naval commander notable for his American service, containing interesting information on the long-term struggle with Barbary