Skip to the beginning of the images gallery
STEBNITSKY, Ieronym Ivanovich.

[Map of the Transсaspian Region. Compiled after the Newest Intelligence of the Department of Military Topography at the Caucasian Military District]. 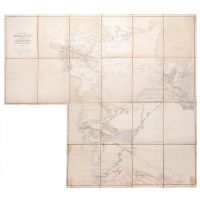 One of the earliest detailed maps to be made of the Transcaspian region - the area between the eastern shore of the Caspian Sea and the Aral Sea - which in the years immediately following the issue of this map, was annexed piecemeal to the Russian Empire following a series of brutal campaigns led by Generals Lomakin, Skobelev, and Annenkov. The map covers the territories of modern Uzbekistan, Kazakhstan and Turkmenistan, stretching as far as the border with Iran and Afghanistan. It was compiled on the basis of the special survey carried out by the Russian military topographer Ieronym Stebnitsky, the then head of the Caucasian branch of the Department of Military Topography based at Tiflis. Stebnitsky served there 1867-1885, creating a world-class centre for regional topographical intelligence. In 1870 Stebnitsky was attached to the Krasnovodsk detachment of the Imperial Russian army and accompanied it during the 1872-3 military expedition to the Khanate of Khiva under command of Colonel Vasily Markozov (1838-1908). As a result the Khanate became economically and politically dependent of the Russian Empire and lost significant territories on the right bank of the Amu Darya River. Stebnitsky thoroughly surveyed the Turkmenian steppes from Krasnovodsk to the foothills of the Kurren Dagh Mountains, the northern and northwestern ranges of the Kopet Dagh Mountains, and followed over 300 kilometres of the dry bed of the Uzboy River - the ancient distributary of the Amu Darya River; he mapped the Chilmamedkum sands on the western part of the Karakum Desert, the Atrek River, and the western ranges of the Turkmenian Khorasan Mountains. In all he traversed 3200 kilometres of territory, over half of which had never been visited by a European. Stebnitsky was a member of the Russian Geographical Society, corresponding member of the Royal Geographical Society (from which he received two gold medals), a founding member of the Russian Astronomical Society, and the director of the Department of Military Topography of the General Staff 1885-1896; Charles Marvin reported that Gen. Dmitri Osten-Sacken, who had seen extensive service in the Russo-Persian War, Russo-Turkish War, the Russian conquest of Caucasus, and the Crimean War, considered him the "the best informed man" on the region (The Russian Advance towards India, p.28), and Victor Dingelstadt, an irrigation expert with wide expertise in Central Asia, described him as "as the best living authority on the orography of the Caucasus" ("The Geography of the Caucasus" in the Scottish Geographical Magazine, V (1889), p.356). An excellent copy of this authoritative, and historically important map.

Light browning overall, some professional reinforcement on the folds, but overall very good.