Skip to the beginning of the images gallery
COURTILZ DE SANDRAS, Gatien. 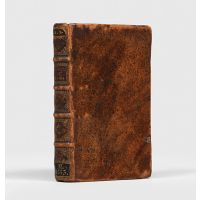 First edition. "Impressive and influential" manual, drawing on the author's experiences during the Franco-Dutch War, 1672-8 (Rowlands, The Dynastic State and the Army under Louis XIV, p. 187). Courtilz de Sandras (1644-1712) joined the army around 1660 serving initially in a musketeer regiment, eventually rising to the rank of captain of cavalry. He left military service in 1678 and set himself up as a "polygraphe", a miscellaneous author, prolific and reckless, always operating on the fringes of the licit, remembered for his pseudo-mémoires, apocryphal autobiographies of the recently famous. In 1686 he set up the Mercure historique et politique in the Hague with publisher van Bulderen, and by 1692 he was living at three different addresses in Paris and drawing considerable attention from the police. In April 1693 he was thrown in the Bastille and remained there for 6 years. It was here that encountered Besmaux, an old companion of the famous musketeer d'Artagnan, who was working as a warden, and assembled the materials for the best known of his biographical excursions, acknowledged inspiration for Dumas's Les Trois Mousquetaires and Vingt Ans après.

A text that reprinted frequently for a number of decades, this first quite uncommon, just 9 locations on WorldCat. This copy with the armorial bookplate of James Keith Fraser, (1832-1895), lieutenant-general 1st Life Guards, saw service at Kinbourn, 1855, Inspector General of Cavalry. Showing a little use, but a pretty copy in unrestored contemporary condition.