Skip to the beginning of the images gallery
(FASHION; DACHÉ, Lilly.) 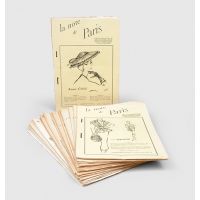 A largely unbroken, notably scarce, run of 40 issues of La Dépêche (September 1949 until October 1950) together with three issues of La Note de Paris (August and October 1950). This run has a key fashion association, the subscriber being renowned milliner, fashion designer, and female entrepreneur Lilly Daché (?1892-1989) during her "heyday in the 1940s and early 1950s" (ANB).

Born in Bègles, France, Lilly Daché "began her millinery training with her aunt, a dressmaker in Bordeaux, but talent and ambition soon led to a four-year apprenticeship with Caroline Reboux in Paris. She later worked for both Suzanne Talbot and Georgette, also noted Parisian milliners" (ANB). Reboux and Talbot are both featured in La Depeche: Reboux, nos. 49 and 137; Talbot, no. 116, 139, and 141. Daché moved to New York in 1924 and immediately found work in a small hat store, the Bonnet Shop, which she soon bought from her employer. By the early 1940s Daché was America's premier milliner with an "elegant New York salon in which she employed 150 milliners, shops in Chicago and Miami, wholesale designs sold to more than forty stores across the country, and more than half a million dollars in business each year, selling hats priced from 35 to 500" (ibid.). Her regular subscription to the French fashion magazines collected here, and her occasional marginal crayon marks highlighting segments of text, demonstrates her desire to stay at the cutting edge of fashion and remain connected to her early roots, allowing her to maintain her reputation as a French designer. "Her growing awareness that hats were losing their place as a vital fashion accessory, combined with her inherent ambition and energy, inspired Daché to branch out into other areas of fashion and beauty. By the mid-1950s she had completely revamped her salon and was designing, in addition to her own line of hats, dresses, accessories, jewellery, lingerie, furs, perfume, and cosmetics, plus men's shirts and ties" (ibid.).
Both La Dépêche and La Note de Paris were female-directed independent fashion magazines for both a French and American audience featuring sketches of new French designs for clothes and accessories, with commentary and "gossip" in both French and English. Included in these richly illustrated magazines are designs by key couturiers such as Christian Dior, Balenciaga and Pierre Balmain, as well as by milliners such as Simone Cange and Madamme Paulette. Extensive runs of La Dépêche such as these are almost unheard of in commerce, with no such collections of this ephemeral publication traced at auction. They are equally uncommon institutionally with just two collections traced; the Bibliotheque nationale de France hold a run dating from 1954 to 1966, and the The Fashion Institute of Technology hold a run of 229 also finishing in 1966. Likewise, runs of La Note de Paris are scarce, with none traced at auction and one set traced institutionally at the Bibliotheque nationale de France.

Text in French and English. Illustrated throughout with ink sketches of designs.

Slight nicks and creasing to edges, horizontal creases due to folding from postage, contents faintly toned, occasional rust marks from staples; a remarkably well-preserved set of this fragile publication.