Skip to the beginning of the images gallery
LEMAIRE DE BELGES, Jean. 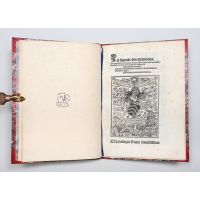 First published at Lyons in 1509 by Jehan de Vingle, La legend des Venitiens was composed at the behest of Louis XII, and "adroitly devised to influence public opinion" (Spaak) as to the legitimacy of the War of the League of Cambrai against the Republic of Venice, started in April 1509. The League of Cambrai was a military coalition comprising Louis XII of France, Ferdinand II of Aragon, the Holy Roman Emperor Maximilian I, and Pope Julius II. By the time the present edition was published, all had switched sides and allied against Louis XII, resulting in one of Lemaire's most virulent publication: the Traité de la différence des schismes (1511). The author, Jean Lemaire de Belges (1473-c. 1555), was a Walloon historian and pamphleteer, one of the best poet of the school of rhetoricians, and forerunner of the Renaissance humanists in France and Flanders. The probable date of this printing comes from the fact that Lemaire was named "Indiciaire et historiographe de la Royne", Anne of Brittany, around 1512, a title mentioned in the prologue. The woodcut author device and the full-page arms of France and Brittany, complete with porcupines and ermines, are attributed to Jean Perréal (c. 1450-c. 153), painter from Lyon, under the patronage of Louis XII, and friend of Lemaire.

From the library of the noted Lebanese collector Camille Nagib Aboussouan (1920-2013), man of letters, ambassador to UNESCO, and translator of Khalil Gibran's The Prophet, with his "Mont. Liban" bookplate of Europa and the Bull to front pastedown, repeated twice as ink stamps to front and rear binder's blanks, and his name in Arabic script stamped at foot of publisher's device page. His library was sold at Sotheby's in 1993.

Wood-engraved arms of the author on the title page, full-page arms of Louis XII and Anne of Brittany, publisher's device to verso of last leaf, and 11 historiated or foliated opening initials.