Skip to the beginning of the images gallery
AYTOUN, Edmondstoune William.

With Illustrations by Joseph Noel Paton and Waller H. Paton. 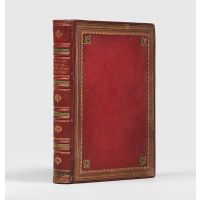 Lays of the Scottish Cavaliers and other Poems.

First Paton edition. Presentation copy from Victoria's favourite daughter, Princess Beatrice, to the queen's favourite servant, John Brown, inscribed by the princess on the front blank, "To John Brown, with best wishes for the season, from Beatrice, Xmas. 1874". An intriguing association: Brown (1826-1883) had been a significant feature in the royal household for the majority of Beatrice's life, having been selected by Prince Albert to be Victoria's personal servant in Scotland in 1858. The Scotsman quickly became indispensable to Victoria after Albert's death in 1861, becoming the cause of salacious gossip and familial tensions. Beatrice (1857-1944) is often considered to have been the closest of Victoria's children to Brown, spending considerable time in his company, notably in Balmoral, and helping him to carry out her mother's wishes in her role as "the prop, comfort and companion" of Victoria. Victoria found solace in both Beatrice and Brown after Albert's death, being "over-protective of her 'Baby' until she was well into adult life" (ODNB).

A superbly illustrated edition. "The book brims with Paton's half-page illustrations, headpieces and tailpieces (augmented by a few landscapes by his brother, Waller Paton) - the armour and historical costumes (Paton was a noted collector of these) perfectly realized to the last detail, the compositions unusual and forceful, the squeezed-together figures wild, Romantic, and brimming with personality, the effects of light and shade Germanic but dazzlingly tonal" (Suriano, p. 165).

Aytoun's Lays, first published in 1849, is modelled on the works of Macaulay and Scott and "became important texts in the romantic revival in mid-Victorian Scotland", a movement which Victoria's passion for Scotland, first fired by her 1842 visit with Albert, did much to encourage (ibid.). Indeed Queen Victoria was presented a copy of an earlier edition of the same work by Prince Albert, later Edward VII, and his wife Alexandra, in 1865.

Lays of the Scottish Cavaliers and other Poems.