Skip to the beginning of the images gallery
BARBUSSE, Henri. 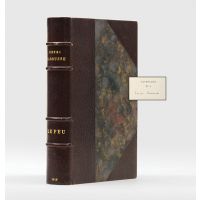 First edition, number I of XX special copies printed on papier vélin de cuve des Usine d'Arches in large paper format and signed by Barbusse for the bibliophiles of Les XX, this copy presented to the society's president Henri Lenseigne, with an autograph letter from Barbusse dated 6 October 1917, and the hand-addressed envelope, here bound in. In the letter Barbusse remarks how thankful he is for the "beautiful and precious" editions produced for Les XX, and says he would be happy to sign the limitation leaves for the society.

Les XX wasfounded in 1897 to encourage the production of fine editions of works specially chosen to offer "an appeal of curiosity, novelty, originality, and intellectual value". Entirely unconcerned with commercial considerations, they published only a single copy for each member. Les XX distinguished themselves by publishing only the most recent contemporary works, "newborn works, which seem to possess a literary value that will make them famous tomorrow, perhaps" (from the statutes of Les XX quoted in Silverman, The New Bibliopolis).

Their choice to support a special issue of Barbusse's Le Feu was very much in keeping with these standards. It was one of the earliest published novels of the war, directly based on Barbusse's experiences at the front and purportedly begun in the trenches. Wounded and invalided out of active service, Barbusse finished its composition while working at the War Office. On publication it inevitably met with mixed responses. In his analysis of the French literature of the war, Jean Norton Cru described it as "a concoction of truth, half-truth, and total falsehood" (Témoins; essai d'analyse et critique des souvenirs de combattants édités en français de 1915 à 1928), and Falls identifies Barbusse as "an able and forceful writer of the school of Zola with even more than his master's brutality and distortion", while awarding the novel a hard-won *. However, Jacques Bertillon, the French medical statistician of the war, praised him as a "moral witness with a story to tell and re-tell", and the novelwas awarded the Prix Goncourt for 1916.

With both original wrappers and the special "XX" issue marbled wrappers bound in.