Skip to the beginning of the images gallery
BOURDÉ DE VILLEHUET, Jacques. 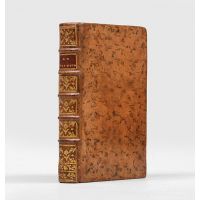 First edition of this important influence on the development of English naval thought; "divided into 4 pts: manoeuvring of ships, evolutions, miscellaneous marine matters, signalling, and also a glossary of terms. It was later translated by David Steel and incorporated into his Elements and practice of rigging and seamanship 1794" (Craig). "Though less illuminating on fundamental principles than Morogues its methods of handling a fleet are more fully elaborated, and it ends by heralding the final reform with an explanation of the system of numerary signals devised and practised by that all too little appreciated genius Mahe de la Bourdonnais, under whom the author must have served in India." (Corbett, Signals and Instructions, 1776-1794, NRS Vol.XXXV). Despite Kempenfelt's efforts (he produced a translation of the signal portion of the book in 1781), a full translation into English was not made until 1788.

Provenance: ownership inscription verso of first blank, and elegant engraved book label to front pastedown, of Devis Decrès, future minister of the navy under Napoleon. Decrès had a brilliant career, a midshipman in 1779, he took part in operations in the Caribbean from 1780 to 1783, promoted ship's ensign in 1782 at the time that he took part in the Battle of the Saintes. His ownership inscription gives his rank as lieutenant, placing purchase of this volume between 1786 and 1793, when he became a captain. Arrested as a noble at the outbreak of the French Revolution, he was reinstated in 1795 and placed in command of the Formidable, and in her took part in the attempted invasion of Ireland in 1796. He was promoted contre-amiral in 1798 and commanded a light squadron during the invasion of Egypt, covering the landing in Malta. He took part in the Battle of the Nile in the Diane, managing to avoid the slaughter, and escaping to Malta, raising his flag in the Guillaume Tell. He was captured trying to break the blockade, and eventually exchanged back to France in August 1800. Napoleon personally presented him with an honour sabre, and appointed him maritime prefect at Lorient. From 3 October 1801 to the fall of the Empire in 1814, he served as Napoleon's Minister of the Navy, being made a duke in April 1813. During the Hundred Days Decrès briefly resumed his post as Minister of the Navy. He died in a house fire in 1820.

Binding only lightly rubbed. An excellent copy, crisp and clean, with the terminal advertisement leaf.