Skip to the beginning of the images gallery
[VOLTAIRE.] 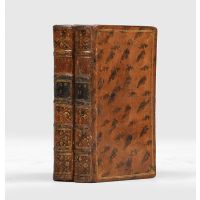 First edition, with a fine Bloomsbury Group provenance, presented by Lytton Strachey to Frances Marshall later Frances Partridge upon marriage, with a notation of the presentation in the latter's hand "Frances Marshall from Lytton 1931" in pencil on the front free endpaper. At the time of the presentation, Frances was the lover of Ralph Partridge, who lived with Strachey in his country house, Ham Spray. In a complicated web of unhappy relationships typical of the Bloomsbury Group, Strachey loved Ralph Partridge, who in turn had rejected him and married Dora Carrington, who in turn had loved and been rejected by Strachey. The year following the presentation, Strachey died, Carrington committed suicide in despair, and the next year Ralph and Frances married.

The Age of Louis XIV ranks among Voltaire's greatest historical works, and was an important step in the development of historical writing, merging political and social history by including art, culture, and literature alongside the monarch and his ministers. Voltaire's emphasis on Louis XIV's patronage of artists and men of letters was a pointed comment against Louis XV and his censors. Voltaire first mentioned the work in a letter of 1733, predicting it may take ten years, but it in fact took almost two decades to complete. A section of the work was published in Paris in 1740, but was suppressed by the authorities, and it was for this reason that Voltaire chose to publish the full work in Berlin, under the protection and encouragement of Frederick the Great, who indeed had it printed by his printer C. F. Henning. Voltaire used the pseudonym of M. de Francheville, a Frenchman in Frederick's court, to protect himself from repercussions in France, but wrote to a correspondent in December 1751 that "it is well known in Europe that I am the author" (see Bengesco).

Strachey "devoted several essays to Voltaire and hung a portrait of him by Jean Huber over his desk, where it dominated his study" (Cronk, Cambridge Companion to Voltaire, p. 10). Indeed, Strachey's 1912 book Landmarks in French Literature has three chapters on Voltaire, and in the fourth chapter, "The Age of Louis XIV", he follows the same interpretation Voltaire espoused in 1751, namely, that under the Sun King "it was as if the whole nation had burst into splendid flower". Strachey's presentation of these Voltaire volumes to Frances Marshall was consequently a considered gift, yet also reflected the Bloomsbury Group's fascination with the writer: Clive Bell, in his notorious essay Civilisation (1928), declared the age of Louis XIV leading on to the time of Voltaire as one of only three truly civilized eras of human history, Leonard Woolf took 70 volumes of Voltaire with him when he travelled to Ceylon, and Virginia Woolf called Voltaire's Candide "100 little pages which we shall remember for the rest of our lives".

With the bookplate of Robert Salusbury Cotton (1739-1809), later MP for Cheshire from 1780 to 1796, here from his student days at Trinity Hall, Cambridge. Expertly refurbished with joints repaired, very faint stain to covers, a few leaves cancelled with inferior paper and subsequently toned, a little closely cropped at head, sig. U9 of vol. I with short closed tear mildly impinging on text, sig. U3 and U4 of vol. II bound in reverse order. Overall a very good copy, contents clean and crisp.