Skip to the beginning of the images gallery
HANCOCK, Samuel Edward, Acting Carpenter. 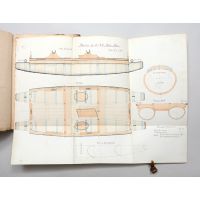 A wonderful insight into naval construction and shipyard practice at the outset of the Anglo-German naval arms race, "formally" initiated with the launch of HMS Dreadnought in 1906. The drawings constituted part of Hancock's training process, similar to the technical drawings, maps and drafts commonly found in a middy's journal book, but here the craft context lends the execution a clear edge of professionalism. The drafts cover a range of subjects, structural, mechanical, ordnance and armour, subjects include; "a section showing framing abaft armour"; "mid section, and framing of after part"; 'boat hoisting derrick'; "Cruiser Fore Section"; '"midship section, and stem"; "Cressy Class, section showing before and abaft double bottoms"; '"Gun support as fitted to 1st Class Cruise"'; "Plan of Conning Tower, King Edward VII Class"; "13ft 6in Balsa Punt". Specific ships referred to include HMS Hibernia, a King Edward VII class battleship, launched in 1905, served with the Northern Patrol and at Gallipoli; HMS Encounter, a second-class protected cruiser of the Challenger class, Australia Squadron, occupation of German New Guinea; HMS Minotaur, lead ship of her class of armoured cruisers, Northern Patrol, participated in Jutland; HMS King Edward was part of the Grand Fleet and was sunk off Belfast in 1916 by a mine laid by the Möwe.

Born 1872 in Cawsand, Devon, Hancock appears on the rolls of Greenwich Royal Hospital School as a scholar at the age of 11, the school had been established in 1805 as the Royal Naval Asylum to provide an education suitable for entry into a seagoing career at various levels for boys whose fathers had died in action. Hancock evidently thrived on the regime, records showing that he served through WWI on Indus achieving the rank of commissioned shipwright and receiving the '14-18 Star, Victory Medal and British War Medal. The quality of the work collected here is mirrored in the comments from his commanding officers in the Carpenters' Service Register identifying in Hancock a "most zealous and painstaking" warrant officer. He served during WWII as a shipwright lieutentant-commander at Devonport and died in 1945. A visually highly attractive, informative and unusual survival from Britain's naval dockyards at the turn of the twentieth century.

Externally somewhat rubbed, some stripping from the marbled paper, the internal binding has cracked open near the front through the weight of the drafts, and most are loose, the unused latter part of the textblock is sound, the contents with occasional minor marks and a few short closed splits, but overall extremely well preserved.