Skip to the beginning of the images gallery
SAXE, Maurice, Comte de. 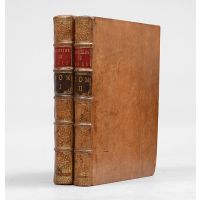 First edition, surprisingly uncommon, three copies only on COPAC. "De Saxe's work is a comprehensive treatise on war. He puts forward his ideal military model, his "legion", and taking issue with the views and practices of his age, he advances many original ideas. However, rather than discussing his military doctrines, the aim of this book is to elucidate the intellectual premises that dominated his mind: he saw a need to subject military affairs to reasoned criticism and intellectual treatment, and the ensuing military doctrines were perceived as forming a definitive system" (Gat, The Origins of Military Thought, p.33). Carlyle described it as a "strange military farrago, dictated, as I should think, under opium", which is perhaps not entirely as unfair as it may seem, a note on the original MS at Dresden reads, "I composed this work in Thirteen nights: I was ill, therefore, it may perhaps bear marks of the fever which I had. This ought to excuse the regularity of the arrangement, as also the elegance of style. I wrote in a military manner and to kill time." Whatever the oddness of its style the Reveries... was immensely influential, reprinted three times in 1757 and again in 1761 and 1763, German editions of 1757 and 1767 and English of 1757, 1759 and 1776.
The Macclesfield copy, with the bookplate of George Lane Parker, who served for more than twenty years in the 1st Foot Guards. In 1773 at rank of Major-General he was appointed Colonel of the 20th Foot and saw service in the War of Independence. One of his contributions to the Shirburn Castle library was a remarkable collection of books detailing the professional interests of a soldier in the latter part of the 18th century, most of the copies, as here, are large margined, handsomely bound and in a wonderful state of preservation, the folding maps and plates so fresh as to actually resist opening.

Fine large engraved trophy vignette to the title page, similar head- and tailpieces throughout, 40 engraved plates, 18 of them double-page, 4 double-page, folding. From the Macclesfield library at Shirburn Castle, with the blind stamp through the prelims

Lightly browned and occasional spots of foxing, but overall a very handsome copy, spine a little dry and some rubbing to the boards, head-cap chipped.