Skip to the beginning of the images gallery
(GEORGIA.) 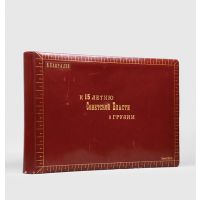 Superb album produced to commemorate the 15th anniversary of the Georgian Soviet Republic (established 1921), one of perhaps a handful put together and presented to leading dignitaries; this copy with the gilt presentation supralibros of Valerian Bakradze (1901-1971), at the time Second Secretary of the Georgian Communist Party and a protégé of Stalin's right hand man, Lavrentiy Beria. 1936 was also the year in which Georgia emerged as a Union Republic; prior to this it had been a part of the Soviet Transcaucasian Federation.

The album opens with "exhibition" size portraits of Lenin, Stalin, Kliment Voroshilov and Sergo Ordzhonikidze, a close friend of Stalin who was instrumental in the founding the Socialist Republic of Georgia. These are followed by two impressively large and crisp panoramic views of Tbilisi with many landmarks clearly discernible, including the Funicular Railway (constructed 1905) that climbs up to the Mtatsminda plateau and affords superb views of the city, and the Sioni cathedral. The most prominent official figure to attend the celebrations was Marshal Voroshilov, at the time People's Commissar for Defence, pictured here giving a speech and shaking hands with the head of the Georgian Republic at the time, Filip Makharadze; alongside an exterior view of the Tbilisi opera house decorated with banners and a portrait of Stalin. The next 19 prints are dedicated to the ceremonial parade, 10 of these of an imposing size (290 x 450 mm) and taken from the same elevated point of view showing the crowd, an army band, and several film crews in attendance; in the background Georgian shops are clearly visible, the building draped with banners in Russian and Turkic carrying slogans declaring brotherhood. The celebrations took place in was was then Lenin Square (now Freedom Square) and included a military march past by infantry, cavalry, units of the tachanka (the Russian horse-drawn machine gun) and tanks (the single-turret T-26, the backbone of Soviet armour at this period), followed by processions of sportsmen and gymnasts, one group shown on a parade float displaying a portrait of Stalin. Several images show people in costume, among these the bogatyr, heroic figures from East Slavic legend, others from Georgian myth and folklore, dancers and singers. Others are the archetype of such rallies of the 1930s in showing men and women marching, one group bearing banners, another carrying the image of Lenin, and in particular one of a young woman posed inside an enormous tyre bearing the legend "Rubber Concern USSR". The last six leaves focus on the Soviet modernization of the city and show new buildings, roads and bridges.

From 1937 to 1946 Valerian Bakradze, was Chairman of the Soviet Council of People's Commissars, known as Sovnarkom. He served on the Central Committee of the Communist Party (1939-1954), was Deputy Chairman of the Council of Ministers of Georgia (1946-1954), and in 1947 Minister of Food. "Bakradze, whose son was married to a niece of Nino Beria Lavrentiy Beria's wife, was personally close to Beria and always went out of his way to please him. He organized a lavish banquet in Beria's honour before his departure for Moscow in 1938, and at a plenum of the Georgian CC on 31 August he was effusive in declaring his devotion to his former chief"; but Bakradze was passed over by Stalin for promotion as he probably "wanted the new party chief to be independent from Beria" (Amy Knight, Beria: Stalin's First Lieutenant, 1993, p. 89). However, with Beria's star on the wane and amid the paranoia and power struggles that followed Stalin's death in 1953 Bakradze "continued to take the lead in denouncing Beria, giving the main report on his alleged crimes at a joint session of the Georgian Central Committee and the Tbilisi Party Committee, held on 13-14 July 1953. Bakradze assailed Beria as a 'foul criminal' and an 'agent of international capitalism,' for whom no punishment would be too severe" (ibid., p. 213). In turn Bakradze was removed from office in the early 50s by the new First Secretary of the Georgian Communist Party, Akaki Mgeladze.

A remarkable, possibly unique, record with a fine provenance, containing some superb images that typify the Soviet festival of the period before Stalin's Great Terror of 1936-38 would cast its long shadow across his native land.

A few light scuffs and abrasions to binding, a few creases to prints, some silvering to a number of images otherwise very good.