Skip to the beginning of the images gallery
BROUGHTON, Thomas Duer. 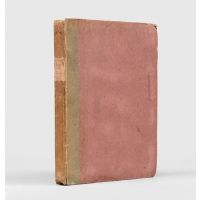 First edition. Edited from a sequence of "thirty-two letters to his brother filled with his observations of the Marathas while serving as commander of the British Resident's escort in Broughton's narrative the Marathas move through a portion of the Rajputana despoiling the countryside, laying siege to forts and burning villages, and fighting amongst themselves much to the dismay and disgust of the author. Of more interest to Broughton, however, were the various festivals and religious ceremonies, both Hindu and Mohammedan, which he recorded in his letters with detail and sympathy" (Riddick).
Broughton (1778-1835) was educated at Eton, commissioned Ensign in 1796 and posted to the Bengal Army the following year; "having chosen the profession of arms he followed it with ardour, and whilst yet a subaltern was actively engaged in the memorable siege of Seringapatam, which the 4th of May 1799, overthrew the dynasty of Tippoo Saib, and conquered his empire. He was afterwards appointed Commandant of the Cadet Corps, a sort of college formed to receive the cadets, and teach and discipline them on their first arrival in the country, an office obviously requiring sound judgement and discreet management" (The Annual Biography and Obituary for the Year 1836, p.441). He was then appointed Military Resident to the Mahrattas, and was subsequently briefly commander of Java. In 1797, he was promoted to lieutenant, transferring to the Madras establishment, captain 1805, major in 1816, lieutenant-colonel in 1822, and colonel in 1829, after which he returned to England. He was made Honorary Secretary of the Royal Asiatic Society, was "an active manager of the Mendicity Society and of the Marylebone schools" (ODNB), and pursued the life of a "literary man" (Annual Biography), publishing Edward and Laura, a "free translation of a French novel written by a warm admirer of Rousseau"; some "interesting and often beautiful Persian poetry, and also some specimens of Hindu poetry", and the present epistolary account a "very valuable work written during his residence with these extraordinary people, in which he has thrown much light on their personal and curious history" (p.442). His health undermined by his time in India, he died aged 57 in 1835. A point of some interest is that this is "The only British book on India to be illustrated entirely after drawings by an Indian artist, 'Deen Alee', whose 'Company' style can still be discerned through the embellishments of the English etcher, T. Baxter" (India Observed) A minor cavil being that the first and last plates are in fact after James Atkinson, who also etched three of the plates). Another notable aspect is that it is widely accepted that the plate "A Meena of Jajurh" contains "The earliest and to date the only pictorial record of anything resembling the Afghan Hound" in its original environment (Niblock, The Afghan Hound: A Definitive Study, p.13). An excellently preserved copy in boards, handsome and uncommon thus.

Hand-coloured aquatint frontispiece and 9 other similar plates, half-title and directions to the binder bound in.

A little rubbed and oiled, head of the spine chipped, tail crumpled, label scuffed but remains clearly legible, corners softened, front joint cracked to the cords but remains sound, very pale toning to the text, the occasional spot of foxing, mild offsetting from the plates, but overall a very good, fresh copy in unrestored contemporary condition.