Skip to the beginning of the images gallery
SUIDAS. 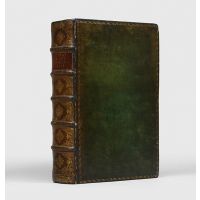 Editio princeps of the archetypal Greek encyclopaedic dictionary, the largest Greek book to be printed in the 15th century; the sole extant source for many lost texts, the sole bearer of decisive variants for many other texts, and the most comprehensive witness to Byzantine culture and scholarship at the end of the first millennium.

As a printed text of 15th-century Europe, the book is a most impressive typographic achievement at a crucial moment in the absorption of Greek culture into the Western Renaissance.

Compiled at the end of the tenth century, the Suda (then known under the personal name of "Suidas") was an encyclopaedic dictionary "which despite its bulk was often recopied because of its proven value to students of the classics" (Wilson, From Byzantium to Italy, p. 38). The text relied on earlier Greek lexica, scholia of Homer, Aristophanes, Sophocles, and the Palatine Anthology as well as earlier grammatical and historical sources.

An unmatched feat of early Greek lexicography, it passed into Western Renaissance through the editorship of Demetrios Chalcondylas of Athens, the most eminent Greek scholar in the West, who had produced the earliest publications of Homer (1488) and Isocrates. In fact, the printing and marketing of the 1493 Isocrates had been a business failure for the editor-publisher Chalcondylas, which perhaps explains the peculiar dialogue between a bookseller and a potential buyer printed here on the first page, where the bookseller urges his customer not to be deterred by the price of 3 gold ducats. Indeed, the commercial success of the Suda turned out to match and repay the masterful and dedicated editorship, showing that the West was ready - even eager - for a demanding and comprehensive encounter with the Greek tradition, as well as ripe, after many editions of Isidore's Etymologiae, for encyclopaedic lexicography.

Chalcondylas applied the most sophisticated editorial care to the completion of the task. He states that he collated numerous manuscripts, and inserted several words not included in the original text. In partnership with the scholar-printer Alexander Minutianus, replaced later by Joannes Maria Cataneus and Antonius Motta, he entrusted the printers Giovanni Bissoli and Benedetto Dolcibelli with the production on 27 February 1499. Proctor traces the well-documented publishing history of the edition. Bissoli and Dolcibelli, possibly former employers of Aldus, had printed two Greek books in Venice in 1498 and set themselves up as competitors. Aldus determined to extinguish the rival enterprise at its root and obtained an injunction against the use of rival Greek type on Venetian territory: his rivals were thus forced to leave the city, and to change their types. "Thus there was a dissolution of partnership, and a sudden flight of the printers, which involved, we must suppose, the withdrawal of the privilege granted to them; and the large differences between their type as used at the two places suggests, though this may be illusory, that they were forced to abandon their stock and could not carry away even the whole of their punches. What is certain is, that a large proportion of the letters are new in 1499; that a new, larger type appears first in the Souidas, and though used only on a single page Neri's dialogue, and so far as I know never found again, it was clearly a complete fount of similar size to the smaller one" (Proctor).

"The Souidas is an enormously voluminous book. It has 1,626 pages. Each page has 45 lines, and each line has about 45 to 55 letters Thus we have 2,077,650 letters in the book. To do all the punch-cutting and casting required, and to edit and print off a volume of this size in nine months and using two presses was a marvellous feat, and justified those concerned in the production of the book in the laudatory dialogue and the epigrams which they addressed to each other and to their readers. The persons in question were the printers, Bissolus and Mangius, whose device, representing two flowering branches on a black ground, with the motto 'Sudauit et alsit', and the initials IB BM, is at the end of the book, and replaces the mark (apparently intended for a pine-cone) which had been used at Venice" (idem).

"Of Bissolus, the punch-cutter, we hear no more. Mangius used the type for a year or two longer, after which it passed to Alessandro Minuziano, who went on using it at Milan until at least 1517. The interest of the whole episode lies in the emphasis placed, by all the participants from start to finish on the quality of letter-design. It is clear that the correct imitation of the best writing was the commonly understood goal" (N. Barker, Aldus Manutius and the development of Greek script and type in the fifteenth century).

This copy carries the first state of sheet ZZ1.8, with the four uncorrected misprints in the Latin verses on ZZ8r, and two contracted words on the same page, omitted by the compositor, stamped with type in the margin with a manuscript mark indicating their place in the text.