Skip to the beginning of the images gallery
SERRES, Dominick, & John Thomas. 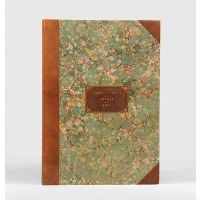 First edition. An excellent copy of probably the grandest English naval aquatint book, eight of the plates here being coloured, in Abbey's copy only plate XVII was coloured. Dominick and John Thomas Serres were father and son. The father was born at Auch in Gascony, and educated at the famous Benedictine academy in Douai, being intended for the clergy. However, he ran away to sea, shipping as a common seaman to South America, and eventually becoming master of a ship trading with Havana. He was captured by a British frigate and brought to England, where he met the marine artist Charles Brooking, being much influenced by his work. "In 1765 Serres became a member of the Incorporated Society of Artists, with which he exhibited for two years. On the establishment of the Royal Academy in 1768 he was chosen one of the foundation members, and was a constant contributor up to the time of his death. Between 1761 and 1793 he exhibited eight works at the Society of Artists, twenty-one at the Free Society, and 105 at the Royal Academy" (ODNB). He was briefly marine painter to George III. John Thomas Serres was trained by his father and succeeded him as marine painter to the King, and to the Duke of Clarence, later William IV "the Sailor King." He was also a regular contributor to the Royal Academy, for the first time at the precocious age of 17, and on the title page here is described as 'Marine Draught-man to the Honourable the Board of Admiralty.' He "worked skilfully in various media but, while his accuracy in ship depiction was akin to that of his father, John Thomas Serres was inclined to over-dramatize weather conditions He is, however, more extensively represented at the National Maritime Museum than his father." The book was "intended to assist his students" at the Chelsea Naval School, and it is interesting to note that the plates in the first section, which are all after John Thomas, are in the main comprised of ship details and simply-engraved ship portraits of various types of vessel. The more complexly composed aquatint plates of the second part, showing shipping in a variety of naturalistically-rendered, recognizable settings - for example plate XXXI depicts A Schooner with a View of New York, and XXXVIII A Polacca with a View of Strombouli - are all after Dominick. Entirely in keeping with the nautical subject matter, the book has been bound using reindeer russia salvaged from the Danish brigantine Metta Catherina, which sank off Drake's Island in Plymouth Sound in 1786.

Engraved Address to the first part with decorative head- and tailpiece, that to the second letterpress, with an engraved border of flags. The first part has 17 plates, 12 of them engraved, the other 5 aquatint, one printed in sanguine, 2 in sepia and on

Some light marginal finger-soiling, a couple of short edge-splits, but overall an excellent copy.