Skip to the beginning of the images gallery
FORBES, Edwin.

A historical work of art, in copper plate etching, containing forty plates, illustrating the life of the Union armies during the years 1862--'3--'4--'5. 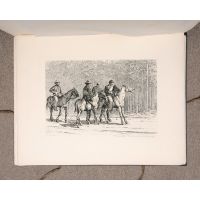 First edition of one of the finest graphic representations of the American Civil War; this copy from the library of a Union army veteran: bookplate of William Bush Blackwell (1837-1922), who served as a first lieutenant and quarter master with the 26th Regiment New York Volunteer Infantry (the "2nd Oneida Regiment") and was later a member of the Military Order of the Loyal Legion of the United States. The 26th New York is the subject of a recent study by historian Paul Taylor: Glory Was Not Their Companion: The Twenty-Sixth New York Volunteer Infantry in the Civil War (2005). The unit was mustered in May 1861 and mustered out in May of 1863, and in that time was present at some of the bloodiest and best known battles of the conflict: Cedar Mountain, Second Bull Run, Antietam, Fredericksburg, and Chancellorsville - it also took part in Burnside's "Mud March" (further information is available at civilwararchive.com) - and was famously photographed on parade at Fort Lyon, Virginia, on New Year's Day 1862.

"Edwin Forbes (1839-1895) was an American landscape painter and etcher best known for his sketches of military life during the American Civil War (1861-1865). As a staff artist for Frank Leslie's Illustrated Newspaper, Forbes travelled with various contingents of the Union Army and was particularly interested in common soldiers' daily lives as well as more traditional subjects like generals and battles. Following the war Forbes published two volumes of his military etchings: Life Studies of the Great Army: A Historical Art Work in Copper Plate Etching Containing Forty Plates (1876)... and Thirty Years After: An Artist's Story of the Great War Told and Illustrated with Nearly 300 Relief-etchings after Sketches in the Field and 20 Half-tone Equestrian Portraits from Original Oil Paintings (1891). Both volumes were well-received, especially Life Studies, for which Forbes received a gold medal at the Centennial Exposition in Philadelphia (1876). General William T. Sherman also purchased a set of the Life Studies plates for his office in the War Department. In 1919 the Library of Congress acquired a large collection of Forbes' wartime work, including drawings, plates and the original impressions from Life Studies" (Penn State University online). This superb memorial of the war often captures vividly the boredom and weariness of the ordinary soldier's experience on campaign. Forbes's work is synonymous with the Civil War and he took great pains in the production of these fine etchings that manage to capture the élan and immediacy of his famous sketches in the field. On the letterpress index he describes himself as "(late) special artist with the armies of the Union, and member of the French Etching Club", whose first exhibition was held in New York immediately after the war in 1866. Aside from its intrinsic interest Forbes's work was also riding the rising tide of interest in etching that is known as the American Etching Revival.

Scarce: not represented in any British or Irish institutional library, OCLC locates copies at 24 libraries (all in the US) and with varying New York imprints: "publisher not identified: 1885" (six), Henry J. Johnson (four), "for the author" or "Edwin Forbes" (eight), "Forbes" but giving his address as 22 Park Place (two), John Beacham (two), W. W. Robacher (two). According to the Indiana Historical Society, Forbes issued his plates in "many versions" - their copy, like ours, has the imprint of both Forbes and the Boston publisher Samuel Walker & Co. This masterful record of the conflict was described in glowing terms by the distinguished Union cavalry commander, William W. Averell: "Any soldier living who was familiar with those scenes will at a glance appreciate the fidelity of these pictures... As a contribution to the graphic history of our late war, they are simply invaluable".

59 scenes on 40 etched plates with original tissue guards, "Descriptive Index" of the plates on inside front cover.

Portfolio professionally refurbished, margins of some plates lightly foxed or slightly dust-marked but a very good copy with rich impressions of the plates.