Skip to the beginning of the images gallery
(JAZZ/SAMIZDAT) DORUZKA, Lubomir. 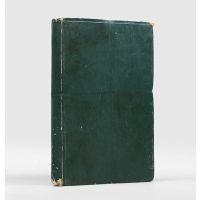 First Russian edition. This detailed overview of the trends in jazz current in the late 60s - early 70s was written in Czech by noted jazz critic Lubomír Dorůžka (1924-1970), and published by the state-run record label Supraphone in 1970, and it would appear that a copy was brought to the USSR and translated in Belarus soon after that. At the time most of the music referred to in the text was impossible to hear in USSR except on illicitly issued vinyl. Dorůžka was well-acquainted with Soviet jazz scene, and his work had considerable impact in samizdat in Iron Curtain countries. Belarus could be considered one of the jazz centres of the Soviet Union. In 1939, Polish Jewish jazzman Eddie Rosner (1910-1976) - referred to as "The Polish Harry James" and "The White Louis Armstrong" - a member of the legendary Weintraub's Syncopators who provided the music for von Sternberg's Blue Angel, and widely recognised as one of the foremost trumpeters in Europe, fled the Nazis and established a jazz orchestra - Belostok Jazz - with the official backing of the secretary of the Belorussian communist party, Panteleimon Ponomarenko. The band became the State Jazz Orchestra and toured extensively in Russia. However, at the end of the war Rosner began to draw unfavourable attention, and was arrested for "anti-Soviet" treason as he tried to escape across the border (cf. Tarr, East Meets West: The Russian Trumpet Tradition from the Time of Peter the Great). Rosner was convicted and spent the next 10 years in the gulag at Magadan in the Soviet Far East. Nonetheless, Minsk became established as unofficial jazz capital of the Soviet Union, when Duke Ellington made his month-long tour of the USSR in 1971, he played 8 concerts in town, drawing people "a lot of them musicians all the way from Riga, Latvia a distance of 700 or more miles Baritone saxist Harry Carney declared 'The people were so emotional. just about everywhere we played we had to do encores of 30-45 minutes. They wouldn't let us off the stage" (Jet, 2 December 1971, p.56). Interesting insight into the Soviet Union's ambiguous relationship with jazz. The original Czech edition can be traced to some 6 institutions internationally - the Czech National Library, and State Reserve Library, NYPL, University of Toronto, National Library of Poland, and Staatsbibliothek zu Berlin, this Russian samizdat version appears to be unrecorded.

Somewhat rubbed, particularly so at the extremities, spine chipping head and tail, corners eroded, paste-action browning at the front endpapers, gutter and margins, quite heavy, even browning throughout, remains very good.