Skip to the beginning of the images gallery
[ROHMER, Sax.] 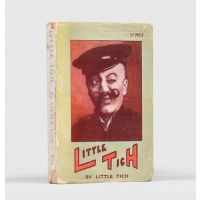 First edition, first impression. Harry Relph (1867-1928), known as Little Tich, was the preeminent music-hall star of his day, famous for his madly elongated shoes and diminutive stature. Film exists of him leaning so far forward over his shoes as to be able to wedge his head into a top hat and stand up again with it on. His literary skills were less impressive and so the young Arthur Ward, aka Sax Rohmer, was commissioned to ghost-write his autobiography. Rohmer was married to a variety-act juggler, Rose, sister of the Crazy Gang comedian Teddy Knox, and had previously collaborated on a book with George Robey. It is Rohmer's second book and one of the great rarities of 20th-century literary collecting.

Library Hub locates copies at just four British and Irish institutional libraries (BL, Oxford, Cambridge. Royal Holloway); OCLC adds Scotland, Ireland, National Diet Library, University of Kwazulu Natal, Yale, Harvard, Biblioteca de Catalunya. The publisher, Greening And Co., went into liquidation in 1912 but had had one great success, Baroness Orczy's The Scarlet Pimpernel (1905). Its proprietor, Arthur Greening, is one of the more colourful figures of Edwardian publishing, "an enterprising song and dance man, the son of a Clapham greengrocer, was torn between business and the stage" (rivendalepress.com, retrieved 6 September 2019).

Half-tone portrait frontispiece of Little Tich from a a photograph by Charles & Russell of Belfast, 16 illustrations on 8 plates, numerous caricatures in the text.

Spine sunned and with some loss of paper at extremities, a few other nicks, chips and creases, two leaves (pp. 123-26) carelessly opened with tears at fore-edge. A very good copy, clean and sound, of a fragile publication.