Skip to the beginning of the images gallery
STRICKLAND, Agnes [& Elizabeth].

connected with the regal succession of Great Britain. 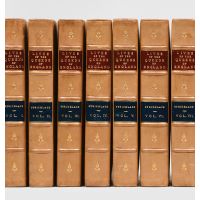 Lives of the Queens of England,

Lives of the Queens of England from the Norman Conquest.

Lives of the Bachelor Kings of England.

An excellent association set with copious autograph revisions by the authors, preparing the text of volumes one, two, seven, and eight of their monumental historical survey for subsequent editions; in all a clear demonstration of the Strickland sisters' tireless dedication to factual accuracy which made them the most prominent and influential historians in their field of study. All but the first two volumes are first editions. Volumes one and two are second editions, revised throughout for the third edition: hand-lettered in ink to the spine of volume one is "For Edition 3d" with the corresponding note "For 3d Edition. Important as new Printers errors have occurred in Edition 2" to the front board. Volume seven is similarly lettered at the head of the front board "Corrected for reprint" and volume eight is marked "For 2d Edition" on the spine and "Corrected Copy" on the front board. The edits to the text appear in ink and pencil, and also include small folding slips of paper, laid in notes and, in one instance, a lengthy single leaf of manuscript content folding out from the page margin. The corrections encompass typographical and grammatical work as well as the improvement of content and updates to source material.
By the early 1830s Agnes (1796-1874) and Elizabeth Strickland (1794-1875), each in their own right enjoying successful literary careers, chose to move towards "a new field of authorship, popular history: they had decided to collaborate on a series of biographies of the queens of England. By the early 1830s Agnes and Elizabeth were devoting part of the morning to reading historical manuscripts in the British Museum Library, with instruction in palaeography from the staff. 'Facts not opinions' was the motto adopted by the sisters, and their manuscript research was both pioneering and intensive" (ODNB). They lobbied politicians to secure entry into the State Paper Office, which did not normally admit women, making them the first women to gain access. The resulting twelve-volume Lives of the Queens of England (1840-48), published by Henry Colburn, "covered enough new ground to be genuinely innovative. Their general thesis was that queens as rulers had been important historical agents (not, as some historians had argued, usually nothing but tools for the ambition and abilities of men) and that queens as women had exercised a civilizing feminine influence as instruments of moral and religious improvement" (Orlando). Like the sisters' numerous other historical biographies it was published under Agnes's name only, by joint agreement, to suit Elizabeth's reclusive nature. Their Lives of the Queens of Scotland was a similarly comprehensive endeavour which enjoyed public and critical acclaim. It was published with William Blackwood in Edinburgh due to the Stricklands and Colburn having failed to reach an agreement. "They were undoubtedly key figures in the development of writing on women's history, playing a role in creating a tradition of female worthies which can be seen as the first step towards fuller scholarly investigation" (ODNB).
This set has an interesting provenance which points to its circulation both within the Strickland family and in Southwold, Suffolk, the sisters' childhood home and the place to which Agnes would return to live until her death. The Canadian artist Agnes Fitzgibbon (1833-1913), who has inscribed the first volume, was the daughter of Susanna Moodie, one of Agnes and Elizabeth's sisters. Moodie and another Strickland sister, Catharine Parr Trail, moved to Canada and wrote about their experiences as early settlers. The first volume also bears the bookplate of Georgina Gertrude Foster (née Cubitt; 1850-1922), who lived in Strickland House in Southwold and whose daughter Georgiana Fanny Julia Foster (1891-1975) inherited a large collection of Strickland material.

Binder's ticket to rear pastedown of each vol. A few marks of ownership: bookplate of Georgina Gertrude Foster (illustrated by T. Rough) to front pastedown of vol. I, inscription "from Agnes Fitz-Gibbon May 1910" to front free endpaper of the same, inscription (dated February 1856) and stamp of "L. S. ?Gore" to front pastedown and title page of vol. III. Cloth a little marked and rubbed, else bright, the spines cocked as expected for heavily edited reading copies, some loss to head of vol. III spine, engraved frontispiece for vol. III loose. Overall a very good set.

Lives of the Queens of England,

Lives of the Queens of England from the Norman Conquest.

Lives of the Bachelor Kings of England.