Skip to the beginning of the images gallery
[TAYLOR, William.] 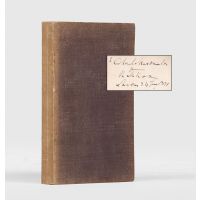 First edition, presentation copy from the author, inscribed on the front free endpaper: "Colonel Macdonald from the Author, Madras 24 Jany. 1871". Scarce, Library Hub cites just two copies among British and Irish institutional libraries (BL, Scotland), WorldCat adds one other (Bibliothek der Franckeschen Stiftungen). 43 subscribers, including a Rev. R. C. Macdonald, headed by Lord Napier (six copies), took a total of 51 copies, although the publisher's note states that "particulars of subscription from the interior of India have not been received in time".

This is an engaging eyewitness guide to Madras, interspersed with some amusing digressions ("Charm of Duelling", "Anthropologists - Species not changeable"), the first two parts devoted to ecclesiastical and civil buildings, the last two to a plethora of subjects ranging from "Sinaiitic Inscriptions", "The Sphinx Riddle" and "Harbour Project at Madras" to a short repudiation of Huxley's theory on the "Monkey origin of Man" (pp. 267-68). The author was the orientalist and missionary the Reverend William Taylor, who was involved in the cataloguing of the celebrated collection of local manuscripts assembled by the military engineer and surveyor Colin Mackenzie (1753-1821), "Mackenzie's collections in Madras (especially modern Indian languages), and at the British Library (classical and European languages), comprise thousands of inscriptions, tracts, and artefacts which are invaluable for studying Indian and Javanese history and culture" (ODNB); however, Taylor has recently been charged with "monumental incompetence" in his handling of Mackenzie's collection (Breckenridge & van de Veer (eds.), Orientalism and the Postcolonial Predicament: Perspectives on South Asia, 1993, p. 309).

Spine sunned and a little rubbed, a few gatherings a little loose but holding, touch of foxing to prelims yet a very good copy.