Skip to the beginning of the images gallery
KEYNES, John Maynard (ed.) 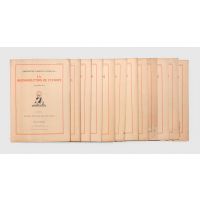 First edition in French of the scarce complete set of the Manchester Guardian Commercial, "a series of weighty supplements on European Reconstruction, with articles by the most distinguished authorities in each country" (Harrod), published under the general editorship of John Maynard Keynes, with contributions by other notable authorities including Gustav Cassel, Luigi Einaudi, Irving Fisher, and A. C. Pigou. As well as in French, the set was published in English, German, Italian, and Spanish. Of the twelve issues, eleven date from 1922 (20 April, 18 May, 15 June, 6 July, 27 July, 17 August, 7 September, 28 September, 26 October, 16 November, 7 December) and one from 1923 (4 January).
"During 1922 the great Manchester Guardian Supplements, twelve in number, were the main vehicle for the expression of Keynes's views. They were entitled Reconstruction in Europe and covered the whole field of finance, industry, trade and labour. Some of the issues were general, some specialised on some such topic as shipping or oil. To almost all Keynes contributed an introductory article, which summarised the subject and usually had some interesting ideas In the first issue there was a lengthy article on 'The Theory of purchasing power parity' and another one on 'Forward Exchanges,' which give a full account of the theory, which he subsequently summarised in his Tract on Monetary Reform" (Harrod).
"An 'important and novel feature' of the First Supplement, which ran through all twelve issues, was the business 'barometer', based on an 'index' of business conditions. Compiled for Europe by the London School of Economics and for the United States by the Economic Research Department of Harvard University, these barometers claimed to be able to forecast changes in the economic weather" (Skidelsky).
"In the eleventh issue Keynes made a frontal attack on deflation. The magnitude of the internal debt of most European countries was the main reason why it was impossible to restore the value of their currencies to their former level. But this was not the only reason. Deflation would cause business depression and unemployment. He cited an article by Professor Irving Fisher in the same issue 'written with overwhelming force and lucidity'. This article by Keynes was his first to sound a clear warning against the evils of deflation and may therefore be regarded as the preface to the work which was to absorb his interests for the next fifteen years and to lead him far from his original starting-point" (Harrod).

Spines a little chipped in places, some nicks and short closed tears to wrapper and leaf extremities, a few corners creased from folding. To individual issues - 3: pp. 139-142 creased from printing error. 9: bottom right corner of front wrapper torn away (still present). 11: the occasional blue pencil marginal mark (i.e. p. 703), pp. 737/738 not fully trimmed along bottom corner, the excess nicked. 12: cover moderately creased with some tears. Overall a very good set, the contents crisp and clean, and well-preserved given the fragility of the paper stock.