Skip to the beginning of the images gallery
BYRON, John. 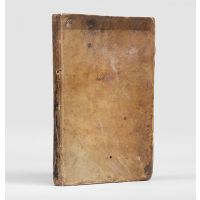 John Byron (1723-1786), known as "Foulweather Jack" because of his persistent meteorological ill-fortunes, had been midshipman on the store ship Wager, part of Anson's squadron bound for the Pacific. Shipwrecked on the southern coast of Chile, he made his way to Valparaíso and returned to Europe by a French ship, arriving back in England in February 1746. This order book documents his naval career for the decade following that early misadventure, comprising transcripts of the orders, signals, and other official communications received by Byron and sent by him in the course of his various commands during the years 1746-56. Very little has been recorded of his activities during this period, Charnock remarking in Biographia navalis that "no mention is made of him during the war", and noting just a single "trivial altercation" during his West African voyage, and DNB merely telegraphically recording his successive commands; the present Order Book to some extent fills this lacuna, providing some detailed, if relatively sparse, documentation for his activities during the period, which in turn offers authentic insight into the nature of command in the Royal Navy during the mid-eighteenth century.

During his absence Byron had been promoted lieutenant; immediately on his return to England in 1746 he was made commander, and at year's end he was made captain. "After the Treaty of Aix-la-Chapelle concluded the War of the Austrian Succession in 1748 Byron commanded the St Albans, one of the squadron patrolling the coast of Guinea; in 1753 he commanded the guard ship Augusta at Plymouth; and in 1755 the Vanguard" (ODNB). The orders for the St Albans include several mentions of actions at Cape Coast Castle which was then the capital of the British possessions on the Gold Coast and was later badly damaged by the French in the Seven Years' War. The final order in the book is dated 27 January 1756. "In 1764 Byron was sent out on a voyage of discovery, during the course of which he circumnavigated the globe and was able to claim the Falkland Islands for Britain and set a record of twenty-two months for a circumnavigation" (Howgego B200). Eighteenth century captain's order books like this one are exceedingly rare, especially ones maintained by famous circumnavigators like Byron, for whom Captain Cook named Cape Byron. The poet Byron was his grandson.

Outside of a few letters, very little manuscript material from Byron seems to have appeared on the market; and institutionally we have been able to trace only a similar Order Book relating to his command of Dolphin, 1764-6, held by the National Maritime Museum.

The covers a bit soiled and darkened, inner hinges loose, but internally in very good condition.