Skip to the beginning of the images gallery
MALLET DU PAN, Jacques.

illustrative of the History of the French Revolution. Collected and arranged by A. Sayous. 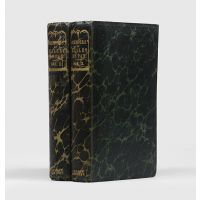 First edition in English of this important work on the French Revolution, originally published in French the previous year. Jacques Mallet du Pan (1749-1800) was a Swiss-born journalist, who "had been a firm supporter of the French Revolution in its moderate phase. In fact, from 1789 to 1792 he directed the political writings of the great newspaper of the revolution, Le mercure de France. In mid-1792, however, he had left France and, after some travels, published his most famous work, Considérations sur la révolution française, in which he argued that the revolution was not caused by the rationalist writings of enlightened thinkers - as Edmund Burke contended - but by a displacement of power... After Mercy's death in 1794 Mallet du Pan began to furnish Vienna with observations regarding the revolution as he followed it from his residence in Berne, Switzerland. These were syntheses and interpretations of information that he received regularly from a vast network of correspondents in France, many of whom served in national, provincial, and local offices and many of whom were members of counter-revolutionary organizations" (Karl A. Roider, Jr., Baron Thugut and Austria's Response to the French Revolution, Princeton University Press, 1987, p. 178).

Interestingly, the printer was Schulze and Co. of Poland Street, Soho, a business established in the first decade of the 19th century by the German emigré Gottlieb Schulze, whose printing house is listed as part of the "counter-revolutionary book trade in London" in Juliette Reboul's French Emigration to Great Britain in Response to the French Revolution (Palgrave Macmillan, 2017). This copy in an excellent example of the striking and highly unusual original cloth binding by Remnant & Edmonds.

2-page advertisement for Bentley's Railroad Library at the front of vol. I.