Skip to the beginning of the images gallery
EDWARDES, Sir Herbert Benjamin. 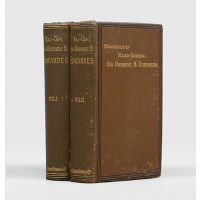 First edition of this uncommon and important source, this a fine association copy with a distinguished provenance: from the library of Field Marshal Sir Neville Bowles Chamberlain (1820-1902), who is mentioned several times in the present work, with his armorial bookplate in each volume. At 17 Chamberlain was commissioned ensign in the Bengal army and his career is elucidated succinctly by the ever-reliable C. E. Buckland: "in the first Afghan War was with Nott's force; at the occupation of Kandahar, at Ghazni, Kabul and Istalif; constantly wounded, was in the Governor-General's bodyguard; in the Gwalior campaign in the second Sikh War, at Chilianwala and Gujarat; complimented by the C-in-C for personal gallantry Commandant of the Panjab Frontier Force; commanded several expeditions against the frontier tribes; in the mutiny of 1857 was in charge of the movable column of the Panjab until he became Adjutant-General of the army at Delhi, and Brig-General; severely wounded there and disabled commanded operations against the Waziris commanded in the Umbayla campaign in 1863, until severely wounded when personally leading an assault of a difficult position commanded the Madras Army, 1876-81 severely criticized the policy of part of the Boer war, 1899-1902; Field Marshal in 1900" (Dictionary of Indian Biography, 1906).

"From letters, diaries, articles, and other books, Edwardes' wife, Emma, has woven together a coherent, if adulatory, work" (Riddick). After Addiscombe, Edwardes travelled out to India in 1841 to join the 1st European or Bengal fusiliers at Dinapore. Based at the frontier station of Karnal he applied himself to the study of languages and quickly qualified as an interpreter. In 1845 "Edwardes wrote a series of critical essays in the Delhi Gazette entitled 'Brahminee Bull's letters to his cousin John Bull', discussing military, political, and social affairs in India that attracted considerable attention among the Anglo-Indian community In November 1845 Sir Hugh Gough, commander-in-chief of the Indian army, selected Edwardes on the strength of these articles as a member of his personal staff. As a result Edwardes was present as aide-de-camp to Gough during the First Anglo-Sikh War at the bloody battles of Mudki on 18 December 1845, when he was wounded, and Sobraon on 10 February 1846" (ODNB). Between 1846-7 he was in civil employment, as the resident Sir Henry Lawrence's private secretary at Lahore, and subsequently at Bannu. In 1848 he played a key role in the siege of Multan, the importance of his actions being "quickly recognized by Sir Henry Lawrence, who declared that since the days of Clive no man had done as Edwardes. His display of initiative and military skill, without formal training, had been instrumental in defeating the rebellion. This was the zenith of Edwardes's career". In 1855 he was instrumental in promoting a treaty of friendship with Dost Mohammed, which was to prove its value when hostilities broke out two years later. During the Mutiny, he worked closely with Sir John Lawrence, Sir Henry Lawrence's brother, and future viceroy, maintaining order in the Punjab. After a sabbatical in England he returned to India in 1862 and held the "prestigious and coveted post" of commissioner at Ambala until his retirement in 1865. He died in 1868. "Edwardes was a brilliant soldier-diplomat, whose willingness to act on his own initiative at the head of an improvised force, despite his lack of formal military training, was instrumental in defeating the insurrection at Multan in 1848. Throughout his career in India he displayed considerable talent as a highly resourceful administrator, and his successful negotiation of the treaty with Afghanistan had a major impact on securing British victory during the Indian mutiny" (ibid.).

Bindings skillfully refurbished, extremities of spine and corners consolidated, scattered foxing to plates. An excellent copy, bright and square, with the publisher's 34-page catalogue at the end of volume I.