Skip to the beginning of the images gallery
GORKY, Maxim. 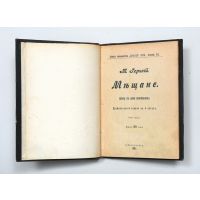 First edition of Gorky's controversial first play. Initially, Meshchane was licensed for publication but banned from public performance by the censors. Following negotiations and some judicious cutting, permission was granted for the play to proceed at the private Panayevsky Theatre in St Petersburg. It debuted on 26 March 1902 with a heavy police presence in the audience and a dozen armed policemen hidden under the stage. "The production was something of a landmark, in that it heralded the advent of Gorky the playwright, hitherto known only as a writer of short stories" (Worrall, p. 127).

"The potency of Gorky's first two plays... is not to be doubted. They were seen by the authorities to represent a threat to public order. In October 1902 the Main Administration of the censorship called the attention of the governor of Nizhni Novgorod province to the fact that neither play was approved for viewing by the lower orders and that even the Moscow Art Theatre had to secure permission for each performance when it gave Meshchane. He was requested to use his police power to make sure that Meshchane be permitted presentation only from copies with cuts made by the censor... Even when the plays were performed with cuts, literate audiences knew the excised lines... a worker recalled having become acquainted with Meshchane in 1903 or 1904: 'A comrade from the factory gave me this book. When I came home from work I would lock myself in my room and sit and read the play without interruption. It gave me indescribable joy!... Gorky's Meshchane opened my eyes to what was going on around me'" (Thurston, pp. 194-195).